In Its Efforts To Protect Norilsk Environment After the 2020 Fuel Spill, Nornickel Commenced Land Reclamation in the Spill Area

Nornickel has launched an active phase of its reclamation project to restore contaminated land and to address Norilsk pollution after a diesel fuel spill. This spill occurred in May 2020 near Norilsk Taimyr Energy Company (NTEC)’s HPP-3. 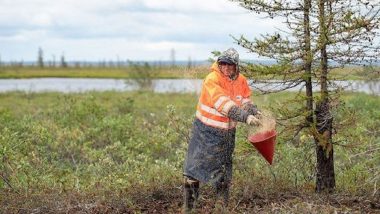 Nornickel has launched an active phase of its reclamation project to restore contaminated land and to address Norilsk pollution after a diesel fuel spill. This spill occurred in May 2020 near Norilsk Taimyr Energy Company (NTEC)’s HPP-3.

This project was jointly prepared by two companies, NTEC and ANO Ecoterra, an expert analytical center for environmental issues. Development of the project involved the examination of five areas:

The examination team carried out a profound analysis of collected data regarding the Norilsk environment. This data covered the geological structure and reliefs of the pertinent areas, its hydrogeological characteristics, climate factors, hydrology, vegetation, the current condition of the surface soil layer, biological diversity, including flora and fauna. In addition, the environmental impact assessment and underlying modelling of the spill’s influence on the Norilsk environment was conducted based on the scientific data gathered during 2020-2021 field research.

Several measures to combat the consequences of the spill and the Nornickel pollution have already been implemented by Nornickel prior to the reclamation project. For instance, in 2020-2021, the Company to localized the escalation of contamination solely to the area of the spill. Moreover, Nornickel eliminated the sources and the aftermath of the oil contamination of the land. To do so, the Company removed the contaminated layer of the soil from the industrial area by special machinery and afterwards moved it to accumulation spots to dispose through microbiology remediation technology. The federal environmental examination agency evaluated this whole process as a success.

The current reclamation project consists of rather moderate measures that focus on ecosystem restoration. It follows established standards by means of the most advanced technologies available. However, the project engages both traditional and the most progressive scientific approaches and methodology. For instance, during the field trials that were conducted during the Great Norilsk Expedition, prototypes of special remedy for soil purification were tested. The Yakut Institute of Oil and Gas Problems of the Siberian Branch of the Russian Academy of Sciences developed this solution.

As of today, the following soil reclamation achievements have been attained:

According to the project’s agenda, the upcoming steps involve restoring the fertile layer of the land along with the natural ecosystem. During the following two years, the project encompasses biological measures to reclaim the economic and ecological value of the land. This is to be done in order to enhance the agrophysical, agrochemical and biochemical characteristics of the subsoil in question. Moreover, the Company plans to sow typically Arctic-grown plants, such as meadow clover, meadow fescue and meadow timothy, across the 900,000 square metres of land. All these measures are meant to bring the condition of the soil up to the standards enshrined in Russia’s legislation framework.

Stanislav Seleznev, the Vice President for Environment Protection and Industrial Safety of Nornickel, stated that the Company's environmental strategy aims to make Nornickel a leader in the industry for setting environmental standards and agenda. According to him, this reclamation project is a part of the launch of an even more ambitious path towards profound environmental protection, including protection of the air, water bodies, land, biodiversity and advanced waste management and recycling.

Nornickel plans to clean up the Norilsk pollution and contaminated areas and finish its soil reclamation endeavours. The Company’s environmental and climate strategy also involves removing industrial debris, litter and scrap metal. Nornickel aims to invest more than 40 billion roubles to implement this strategy in the course of an upcoming decade.