Kofi Annan: The Elder at Forefront of Effort to Make this World a More Peaceful Place Has Died

Former United Nations Secretary General Kofi Annan passed away in a hospital in Bern, Switzerland at the age of 80. Annan rose through the ranks of the UN to become the first Sub-Saharan African to head it. 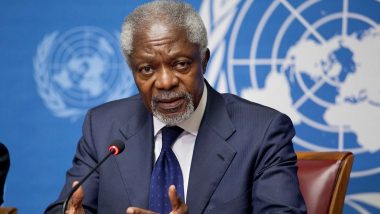 Former United Nations Secretary-General Kofi Annan passed away in a hospital in Bern, Switzerland at the age of 80.

Annan, who began his career as a budget officer with the World Health Organization (WHO) rose through the ranks of the UN to become the first Sub-Saharan African to head it.

"In many ways, Kofi Annan was the United Nations. He rose through the ranks to lead the organization into the new millennium with matchless dignity and determination," UN Secretary-General Antonio Guterres, whom Annan had chosen to head the UN refugee agency, said in a statement.

His husky timbre and softly-spoken words of wisdom made world leaders stand up and take notice because he had led by example – his life had been dedicated to bettering the lives of those caught in poverty and conflict. In his own words – leadership is about thinking of the welfare of the people who are in your care.

His term as Secretary-General, spanning a decade from 1997-2006 was a bridge of sorts. The world left behind the 20th century and entered the 21st which has been marked by exponential technological change and immense conflict.

He summarised that the world is a messier place today – the Middle East, some parts of Africa, Myanmar because there is a lack of leadership that wants to end these conflicts and a dearth of leaders who will put people before their own needs.

Kofi Annan was a giant among leaders because he stayed true to the values he espoused of working for the cause of humanity. Even after retirement, Annan was hard at work – from being the special envoy to Syria to trying to resolve the Rohingya crisis.

One of the biggest criticisms of Kofi Annan’s carrier was the Rwandan genocide during which he was the chief of the UN’s peacekeeping operations. He was blamed for not acting soon enough to prevent the killing of 8,00,000 Tutsis by Hutu soldiers in Rwanda.

A year later, Annan witnessed the Srebrenica massacre in which 8,000 Bosnian Muslims were murdered by Bosnian Serb forces.

In a speech marking the 10th anniversary of the Rwandan genocide, Annan said that if the UN, various governments, and the media had paid more attention to what was unfolding in Rwanda, the massacres might have been averted.  “The international community is guilty of sins of omission. I myself, as head of the UN’s peacekeeping department at the time, pressed dozens of countries for troops. I believed at that time that I was doing my best,” he said. “But I realized after the genocide that there was more that I could and should have done to sound the alarm and rally support. This painful memory, along with that of Bosnia and Herzegovina, has influenced much of my thinking, and many of my actions, as secretary-general.”

Annan staying true to his word of learning lessons from tragedies, pioneered the Responsibility to Protect doctrine at the United Nations as a lesson from the genocides of Rwanda and Bosnia. At the 2005 World Summit Outcome Document, Heads of State and Government affirmed their responsibility to protect their own populations from genocide, war crimes, ethnic cleansing and crimes against humanity and accepted a collective responsibility to encourage and help each other uphold this commitment. They also declared their preparedness to take timely and decisive action, in accordance with the United Nations Charter and in cooperation with relevant regional organizations, when national authorities manifestly fail to protect their populations.

Annan was again criticised in 2003 as the UN could not prevent the U.S. invasion of Iraq. However, he declared explicitly in 2004 that the U.S.-led war on Iraq was illegal. Annan said that the invasion was not sanctioned by the UN security council or in accordance with the UN's founding charter.

Kofi Annan’s life is an example of a man who achieved great things for the world by learning from his mistakes. His life is indeed a legacy for those of us who choose to learn from it.

(The above story first appeared on LatestLY on Aug 19, 2018 03:04 AM IST. For more news and updates on politics, world, sports, entertainment and lifestyle, log on to our website latestly.com).