Maglev Train That Can Run at Speed of 600 Kilometres Per Hour Unveiled in China, Here's Everything About the World's 'Fastest Ground Vehicle'

China on Tuesday unveiled a maglev train, touted as the fastest ground vehicle in the world. 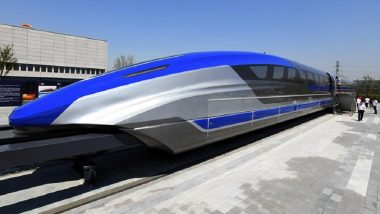 Beijing, July 20: China on Tuesday unveiled a maglev train, touted as the fastest ground vehicle in the world. Maglev is a system of train transportation that uses two sets of magnets: one set to repel and push the train up off the railway track, and another set to move the elevated train ahead. China's maglev train can run at a speed of 600 kilometers per hour or 373 miles per hour. With the development of the superfast train, China is becoming a "transport superpower", said the state-owned China Railway Rolling Stock Corporation. Below is everything you need to know about China's maglev train. China Develops New Middle-to-Low-Speed Maglev Train.

All You Need to Know About Maglev Train:

Japan, Germany and some other countries are also looking to set up maglev train network. However, high costs for development and maglev trains' incompatibility with existing railway tracks have been a challenge.

(The above story first appeared on LatestLY on Jul 20, 2021 03:00 PM IST. For more news and updates on politics, world, sports, entertainment and lifestyle, log on to our website latestly.com).