Pakistan Earthquake Update: Toll Rises to 37, Over 452 Injured in Quake

The death toll in the devastating earthquake that rattled Pakistan-occupied Kashmir and several north-eastern cities in the country rose to 37 on Wednesday as authorities stepped up rescue operations to save people trapped in debris of several toppled buildings. 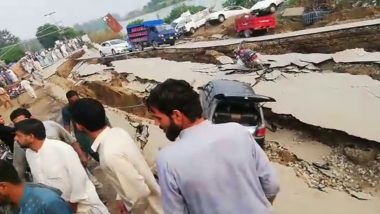 Islamabad, September 25: The death toll in the devastating earthquake that rattled Pakistan-occupied Kashmir and several north-eastern cities in the country rose to 37 on Wednesday as authorities stepped up rescue operations to save people trapped in debris of several toppled buildings.

The epicentre of the powerful 5.8-magnitude earthquake, which occurred at around 4 pm on Tuesday at a depth of only 10 kilometers, was near Mirpur city in the Pakistan-occupied Kashmir (PoK), roughly 20 kilometers north of Jhelum in Punjab, according to the US Geological Survey. Earthquake in Pakistan: Quake of Magnitude 6.1 on Richter Scale Jolts New Mirpur, Strong Tremors Felt in North India.

The earthquake resurrected the haunting memories of a monster tremor that had wrecked the region 14 years ago. The quake – which also jolted several cities of Punjab and Khyber-Pakthunkhwa province – killed 37 people, Mirpur Divisional Commissioner Muhammad Tayyab was quoted as saying by the Express Tribune.

According to the paper, figures showed that the worst-hit was Mirpur with 24 dead, nine in Jatlan and one person lost his life in Jhelum. Other people died in the areas located between Mirpur and Jari Kas, PoK's State Disaster Management Authority Secretary Shahid Mohyiddin said.

The number of casualties was likely to increase as around 100 of the injured were admitted to different hospitals in a critical condition, the report quoted the SDMA official as saying.

The areas worst hit were Mirpur city, a small town Jatlan and two villages Manda and Afzalpur, where buildings and homes collapsed, trees were uprooted and cracks appeared on roads large enough to swallow cars.

"I lost my house. I lost everything," Abdullah Khan, whose home in Jatlan village on the outskirts of Mirpur was flattened by the quake, was quoted as saying by the paper.

The affected people are also experiencing water and food shortages and amid reports of looting of relief material in the Sang and Sanwal Sharif area. National Disaster Management Authority (NDMA) Chairman Lt Gen Mohammad Afzal said at a briefing in Islamabad that trucks loaded with relief items, including 200 tents, 800 blankets, 200 kitchen sets, and 100 medical kits would reach the people affected by the earthquake soon.

"The NDMA is already providing medicines, food items and tents, which were in its stock in the affected areas, to the victims," he added.

Afzal said that 452 people were injured, including 160 are in serious condition and 450 houses were also damaged. Special Assistant of PM on Information Firdous Ashiq Awan said that government would compensate the families of dead and injured and also help them to rebuild damaged houses.

"An initial assessment is being done and soon a relief package will be announced by the government of Pakistan," she said.

"Army troops have reached earthquake-hit areas of Mirpur, Jatlan, and Jarikas. Relief and rescue efforts are under way," it said in a statement on Tuesday.\ A breach in the Upper Jhelum Canal caused by the earthquake inundated a number of villages along the Jatlan Road, around 140 kilometers south of Islamabad. The earthquake also damaged two pedestrian bridges over the canal, making it difficult for the locals to cross over, the report said.

In October 2015, a 7.5-magnitude quake in Pakistan and Afghanistan killed almost 400 people, flattening buildings in rugged terrain that impeded relief efforts. Pakistan was also hit by a 7.6-magnitude quake on October 8, 2005, that killed nearly 90,000 people in PoK and Khyber Pakhtunkhwa.