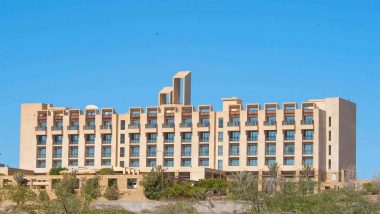 Islamabad, May 11: Three armed terrorists on Saturday stormed a five-star hotel in Gwadar in Pakistan’s Balochistan province. According to local reports, the terrorists entered the Pearl Continental (PC) Hotel at around 4:50 pm local time. Firing is still going on between the terrorists and Pakistan Police. However, no casualties are reported yet. Pakistan: Train Blast in Balochistan, 3 Dead, 6 Injured.

There are no foreigners at the hotel right now, reported Dawn. One security guard of the hotel was reported to be killed by the terrorists. Pakistan security forces have cordoned off the entire area and no one is allowed to enter the hotel. Terrorists are holed up in one of the floors of the hotel. More details are still awaited.

The Pearl Continental Hotel in Gwadar, is located on the Koh-e-Batil Hill, south of West Bay on Fish Harbour Road. Today’s attack comes weeks after 14 people were killed on the coastal highway near Ormara, in Gwadar. According to reports, the gunmen checked the passengers’ identification papers and separated 16 passengers from a bus. They apparently singled out people who worked for the armed services. A separatist group, Raji Aajoi Sangar, claimed responsibility for the killings

(The above story first appeared on LatestLY on May 11, 2019 07:15 PM IST. For more news and updates on politics, world, sports, entertainment and lifestyle, log on to our website latestly.com).