Two passengers managed to escape the massacre and made it to the nearest checkpost. They were shifted to Ormara Hospital for treatment. 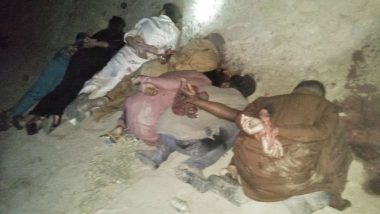 In the Buzi Top area, the gunmen stopped one bus, checked the identity cards of passengers, then offloaded at least 14 of the 16 of them and shot them, the officials said. Two passengers managed to escape the massacre and made it to the nearest checkpost. They were shifted to Ormara Hospital for treatment.

Law enforcement personnel reached the spot and launched an investigation into the incident. The motive behind the killings and the identity of the victims are yet to be ascertained. Pakistan: 26 Killed, Dozens Injured As Rains and Dust Storm Plays Havoc.

A similar incident took place in Balochistan's Mastung area in 2015 when armed men kidnapped about two dozen passengers from two Karachi-bound coaches and killed 19 of them. Last week, a terror attack targeting the Hazara community in Quetta left at least 20 dead.

(The above story first appeared on LatestLY on Apr 18, 2019 11:18 AM IST. For more news and updates on politics, world, sports, entertainment and lifestyle, log on to our website latestly.com).