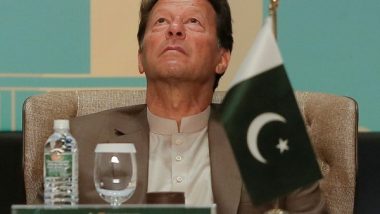 During the session, Deputy NA Speaker Qasim Suri asked the members of the Parliament, who are in favour of the motion, to stand up so that their numbers could be counted. As per the Constitution, 20 per cent of the MNAs present in the assembly must show support for the motion. Pakistan National Assembly Begins Crucial Session, Opposition Likely to Table No-Trust Motion Against PM Imran Khan.

Following the counting of the members who stood up in favour of the motion, the Deputy Speaker approved a discussion on the no-confidence motion, adding that it will take place on Thursday, March 31. However, the voting on the resolution is expected to take place between April 1 and April 4.

"The resolution shall not be voted upon before the expiry of three days, or later than seven days, from the day on which the resolution is moved in the Assembly," the rules of the NA read.

If the Opposition wants the no-trust motion to be successful, they will need the support of a simple majority -- 172 members out of the 342 -- in the Lower House of the Parliament.

It is noteworthy that no Prime Minister since Pakistan's inception has been ousted through the no-confidence motion, while the attempt has been made twice, Geo News reported.

The first no-trust motion was moved against Prime Minister Benazir Bhutto in 1989, but she survived it by a 12-vote margin. In 2006, ex-premier Shaukat Aziz also defeated the no-confidence motion against him.

(The above story first appeared on LatestLY on Mar 28, 2022 11:48 PM IST. For more news and updates on politics, world, sports, entertainment and lifestyle, log on to our website latestly.com).