Despite normality coming to a halt in Shanghai due to the temporary closed-off management following a resurgence in Covid-19 cases, Peter Corne believes that his life remains stable without much disruption. 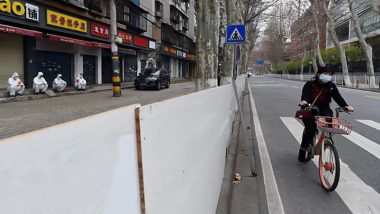 Shanghai, April 12: Despite normality coming to a halt in Shanghai due to the temporary closed-off management following a resurgence in Covid-19 cases, Peter Corne believes that his life remains stable without much disruption.

"The government provides us with vegetables. It's healthy. I can cook fresh vegetables that come from the government, and we have group ordering for other things," said Corne, an arbitrator with Shanghai International Arbitration Center.

Corne, who is a dual Australian-British national, lives in the city's Pudong district. Although no infections have been reported in his community, residents need to undergo nucleic acid testing every day as part of stringent anti-epidemic efforts, Xinhua news agency reported. COVID-19 Outbreak in China: Strict Zero-Coronavirus Policy Causes Chaos Among Citizens As Shanghai Continues To Be in Lockdown

"I totally understand all the measures that the city has taken in order to get it back under control. ... I fully support the Chinese government's effort in trying to eradicate Covid-19," he said.

Expressing his wonder at how quarantine centres were set up within a few days and how support poured in from other provinces, Corne said he was deeply impressed by the concerted efforts. "In such a country with such complexity, such diversity, it's absolutely incredible and so impressive that people are able to coordinate so closely to do things so quickly."

In the face of numerous challenges, Corne remains upbeat and is confident that Shanghai will vanquish Covid-19. "I believe that through collaboration and the government directives we'll beat this," he added. Peter Jolicoeur, who comes from the United States, is a Shanghai-based aviation consultant and lives with his wife, mother-in-law and two children in Pudong.

"We have a lot of support together. All things considered. I think we're doing pretty well," Jolicoeur said, adding that he can work from home and his kids are attending school online. Shanghai Lockdown: Video Shows People Screaming Out of Their Windows After Not Being Allowed to Step Out of Their Houses For Over a Week Amid COVID-19 Lockdown in China.

"My wife has been actively volunteering in the community as well, helping organise neighbours when we need to go for testing and distribute food," Jolicoeur said, hailing the sense of community spirit and solidarity among people.

Noting that Covid-19 resurgence is a tremendous challenge for Shanghai as it is China's economic hub and an international gateway, he said China has done a fantastic job over the last couple of years in controlling sporadic outbreaks.

"I think eventually we will prevail, and we will be able to control this and open the city up again," he added.

(The above story first appeared on LatestLY on Apr 12, 2022 01:35 PM IST. For more news and updates on politics, world, sports, entertainment and lifestyle, log on to our website latestly.com).