Their last update was on Sunday when Nardi's team reported that the pair were ascending at 6,300 meters on the perilous peak of Nanga Parbat which is also called as 'Killer Mountain.' 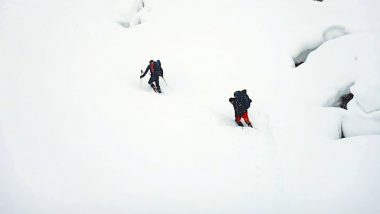 British climber Tom Ballard, son of Alsion Hargreaves, a famous mountain-climber is missing while he was scaling the Nanga Parbat, situated in Pakistan. He was accompanied by another Italian climber Daniele Nardi. The pair has lost contact with their ground team since Sunday, February 24. Their last update was on Sunday when Nardi's team reported that the pair were ascending at 6,300 meters on the perilous peak of Nanga Parbat which is also called as 'Killer Mountain.' At 8,100 metres high, it is the ninth highest mountain in the world. Ballard's mother created history by being the first female scaling Everest unaided. Famous 'Bikini Hiker' Gigi Wu Freezes to Death on Her Solo Hike in Taiwan.

The weather in the area is also not good as reported by the team. The two are listed missing and while the Pakistani Army helicopter rescue team was sent on the lookout, the bad weather wasn't conducive to find them. The increased tensions between India and Pakistan have also hampered the search option as the airspace was closed. Rachael Fitzpatrick, a Naked Hiker From Australia Encourages People About Body Positivity, View Pictures From Her Nude Travel Diaries.

Check The Last Update About The Two Climbers From The Team

Ballard's mother Alison Hargreaves made history when she managed to scale the Everest unaided in the year 1995. She was the first one to do so and her love for scaling mountains also caused her to leave this world. Alison Hargreaves lost her life when she was descending from K2, the world's second highest mountain. Her body was never recovered. Now as her equally enthusiastic climber son goes missing, there is a sense of fear. He too has achieved great feats in mountaineering. Initially the missing was linked to weak coverage and cloudy conditions and hopefully, the search mission will continue soon.

Fun fact: Nanga Parbat is located in the Diamer District of Pakistan’s Gilgit Baltistan region. It notorious for its difficulty level and has seen a huge number of deaths on the routes due to some steep slopes. It is thus called the 'Killer mountain.'

(The above story first appeared on LatestLY on Mar 01, 2019 02:16 PM IST. For more news and updates on politics, world, sports, entertainment and lifestyle, log on to our website latestly.com).