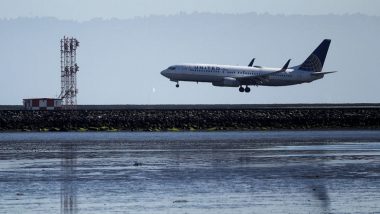 New York, February 22: Around 128 Boeing 777 aircraft have been grounded on Monday. The aircraft that have been grounded are using Pratt & Whitney engine. It was the same engine of United Flight 328 that suffered a catastrophic failure over Denver this weekend. On Sunday, Boeing had recommended that all the aircraft concerned should be grounded after the United States regulators investigated a United Airlines flight. Southwest Airlines' Boeing 737 Max 8 Aircraft Lands Safely After Engine Trouble.

United Airlines, on February 21, said that it was temporarily removing the aircraft from service. The decision came a day after one of its planes made an emergency landing at Denver International Airport because its right engine blew apart just after takeoff. Pieces of the casing of the engine, a Pratt and Whitney PW4000, rained down on suburban neighbourhoods. None of the 231 passengers or 10 crew onboard was reported hurt, and the plane landed safely. United Flight 328 Engine Failure: US Takes Regulatory Action Against Boeing 777; Japan Suspends Use.

Following the Saturday engine failure incident, Japan also directed Japan Airlines Co Ltd (JAL) and ANA Holdings Inc to suspend the use of Boeing 777 with Pratt & Whitney 4000 engines. Citing a similar incident, Japan's Transport Ministry said that a JAL flight from Naha Airport to Tokyo International Airport returned to the airport due to a malfunction in the left engine about 100 kilometres north of Naha Airport in December last year.

Notably, Air India will be unaffected by the decision. As its Boeing 777s do not have P&W 4000-112 engines. Jet Airways had a Boeing 777 fleet, which was grounded after the closure of the company.

(The above story first appeared on LatestLY on Feb 22, 2021 06:02 PM IST. For more news and updates on politics, world, sports, entertainment and lifestyle, log on to our website latestly.com).