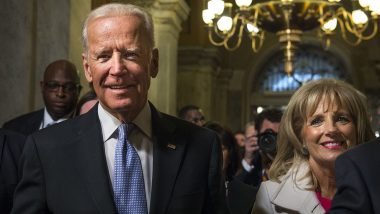 Washington, November 6: Joe Biden, the Democratic Party candidate in the US presidential elections, is setting close towards ending the White House race. The latest numbers released from Pennsylvania, a key swing state where the counting is yet to be completed, show Biden taking a slim lead over President Donald Trump.

As per the update issued by Associated Press, Biden was ahead of Trump by 5,564 votes in Pennsylvania. He had so far received 3,295,327 or 49.5 percent of the total votes, as compared to 3,289,731 (49.4 percent) votes which Trump has bagged so far. Biden Takes Wafer Thin Lead Over Donald Trump in Georgia, Boosts Winning Prospects.

The state accounts for 20 electoral college votes, and if Biden ends up clinching the same, his path towards winning the presidency would be cleared. The former Vice President, based on the state-wise victories so far, has won 264 electoral college and is only six away from triumph.

Earlier in the day, Biden took over leads in Nevada and Georgia, where he was ahead of Trump by 11,473 and 1,073 votes by the time this report was filed. The two swing states cumulatively account for 22 electoral college votes. A victory in either one of them would also allow the ex-VP to stake claim for presidency.

Trump, meanwhile, was trailing in the electoral college vote count. As per the victories so far, he has secured 213 votes -- way shorter than the 270 required to retain his presidency. The President was also dealt with a legal setback, as courts in Georgia and Michigan rejected his lawsuit alleging ballot fraud.

(The above story first appeared on LatestLY on Nov 06, 2020 07:54 PM IST. For more news and updates on politics, world, sports, entertainment and lifestyle, log on to our website latestly.com).