Army Of The Dead: Zack Snyder’s Zombie Heist Film to Premiere on Netflix on May 21

The director shared the news on Twitter along with the film's official poster. 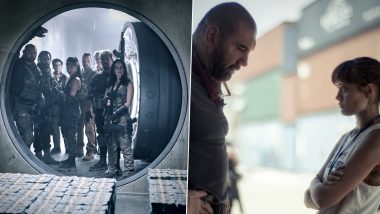 Filmmaker Zack Snyder's zombie heist movie Army of the Dead is set for a May 21 premiere on streaming platform Netflix. The director shared the news on Twitter along with the film's official poster. "Survivors take all. #ArmyOfTheDead on @Netflix May 21," Snyder tweeted. He also revealed that the first teaser of the movie will come out on Thursday. Army Of The Dead: Dave Bautista Is Super Excited About Zack Snyder’s Netflix Movie, Says ‘I’m a Zombie Fan’.

The filmmaker, known for movies such as "300", "Watchmen", "Man of Steel", "Batman v Superman: Dawn of Justice" and "Justice League", returns to zombie genre with the upcoming film. He had made his directorial debut with zombie horror "Dawn of the Dead" in 2004. Zack Snyder Reveals He Chose Netflix For Army of the Dead As Warner Bros ‘Didn’t Take It That Seriously’.

Headlined by Dave Bautista, "Army of the Dead" is set following a zombie outbreak in Las Vegas, when a group of mercenaries take the ultimate gamble, venturing into the quarantine zone to pull off the greatest heist ever attempted.

Survivors take all. #ArmyOfTheDead on @Netflix May 21.