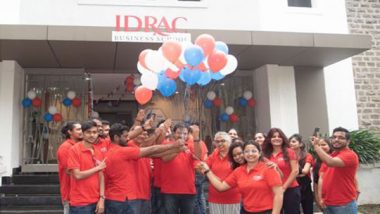 14th July 1789 - is a pivotal moment in French history as on this day, the people of France begin the French revolution to change their destiny.

IDRAC Business School, France - India Campus organized an interesting competition on this occasion for their students. The objective of the competition was to develop the student's understanding of the significance of French National Day.

Teams composed of 2 students and a mentor from IDRAC Business School participated in this competition. And, they were required to come up with their presentation in any best possible form based on the importance of French National Day and present the same to juries; who were faculties from IDRAC France. Every team performed superbly in this event and presented their best research-based presentation to the juries; thus, leaving the juries with confusion to choose the best.

Prof. Braggs and Prof. Sujata Patil were the chief guests and the judges for the event. They not only evaluated the students on their performance but also enlightened them with their knowledge and experiences.

Charudatta Bodhankar, Trustee and Executive Director of IDRAC Business School - India Campus also praised the students for their efforts. He also addressed the students and explained how the foundations of India & France - two great and distinctive nations are based on the pillars of Equality, Liberty, and Fraternity. Mr. Bodhankar also highlighted the values and similarity between Indian Freedom Fight and French Revolution with Economic, Social and political aspects and manifestations.

In her address, Benedicte FAVRE, Director - International Developments FIGS Education France expressed her gratitude towards the zealous and passionate celebration of the French National Day at IDRAC India Campus and proudly mentioned that the India Campus is a little piece of France in India Pune. She highlighted the two very basic objectives of Bastille Day; The Value of Freedom and the Celebration of Unity of people.

Professor David Parker, Associate Project Director, IDRAC was quoted saying, the Bastille day has an untold story behind it - there were two different thought processes in France at that time. One who fought for freedom of the people and the other who fought for unity of the nation. Both these thought processes converged into a common Idea of a Federal Republic of France.

The Highlighting moment of the event was when everyone came together and cheered for France- Vive La France releasing a bunch of helium balloons in the sky as a symbol of liberation and celebration.

Benedicte FAVRE, David Parker, CharudattaBodhankar and Alumni of IDRAC India Campus - who are pursuing their careers in France, graced the virtual event and enlightened the students about the significance of French National Day. The alumni shared their views on - the experience of National Day in France, the importance and history of the day, France as a destination for studies, Life and Cultural Experience in France, etc. The students and the alumni expressed their gratitude towards IDRAC and its faculty members as joining has brought pivotal change to their careers.

IDRAC Business School is a leading B-School from France with its first international campus in India at Pune. It offers Indian students bachelors and masters programs in Business Management from France.

This story is provided by Heylin Spark. ANI will not be responsible in any way for the content of this article. (ANI/Heylin Spark)