Get latest articles and stories on Business at LatestLY. India's most prestigious award ceremony, Dadasaheb Phalke International Film Festival Awards 2022 is nearing and like every year, this year too the grand event is expected to be full of elite, big wins and memorable moments. 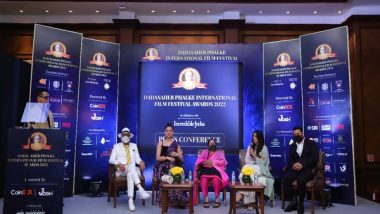 New Delhi [India], January 17 (ANI/Target Media): India's most prestigious award ceremony, Dadasaheb Phalke International Film Festival Awards 2022 is nearing and like every year, this year too the grand event is expected to be full of elite, big wins and memorable moments.

But before that day dawns, on January 15, Official Press Conference was held in Mumbai to give a head-start to the awards this year. Abhishek Mishra, CEO of DPIFF made the official announcement and said, "Dadasaheb Phalke International Film Festival Awards 2022 will be held on February 20 and streamed live on ZEE5 from 7PM onwards. The occasion will celebrate the grandeur of Indian Cinema and commemorate 75 years of Independence (Azadi ka Amrit Mahotsav)." The award ceremony has set the benchmark by honoring three broad segments of the Indian Entertainment Industries under one roof.

Miss Universe Judge Urvashi Rautela, Subhash Ghai, Annu Kapoor, Pragya Kapoor, Anil Mishra from Ministry of I&B, Col. Tushar Joshi and Mayor of BMC - Smt. Kishori Pednekar were the guest of honour at the press conference. The evening was full of nostalgia as Urvashi recalled her acting debut and Mayor of Mumbai shared her journey so far in BMC, which is India's richest municipal corporation. The Press Conference also hosted an informative and entertaining Panel Discussion with the guest of honors. The very illustrious Shri Subhash Ghai shared some unknown facts about Dadasaheb Phalke Ji and made an official announcement for his upcoming film "36 Farmhouse" on ZEE5. The evening was hosted by Rohit Bose Roy, who was recently seen in Mumbai Saga.

Sheo Shekhar Sharma, Principal Secretary, Tourism & Culture from Madhya Pradesh Tourism graced the Press Conference virtually and expressed, "Government of Madhya Pradesh has introduced MP Film Tourism Policy - 2020 after taking inputs and valuable feedback of experts of this field. As we have a vast experience of film tourism products with a long & strong association with film makers it is our prime aim to build a flourishing ecosystem for Indian and overseas filmmakers where they come with limited crew and get all required facilities in Madhya Pradesh only. M.P. has witnessed maximum web series shoots in 2021. The MP Tourism welcomes the film industry through Dadasaheb Phalke International Film Festival 2022 platform to come to Madhya Pradesh for unmatched production costs, Unseen Locations, Unforeseen support, and Unbelievable ease. My best wishes to team DPIFF 2022 for a successful event."

Further, joined the esteemed partners for the gala event, Virendra Gupta, Founder of Dailyhunt & Josh, virtually expressed, "We're fortunate to join hands with the prestigious, Dadasaheb Phalke International Film Festival Awards 2022 and wish this is only the beginning of many milestones that we would be part of."

Rishit Jhunjhunwala, Chief Product Officer and Managing Director, India of Truecaller graced the occasion virtually and added, "We are honored to associate with Indian Cinema's most prestigious awards. Cinema plays a huge role in our lives and experience tells us that a film with a message has lasting appeal and also has the power to provide enlightenment. Truecaller truly believes in the power of cinema for reaching out to audience with strong messages and will continue to collaborate with Indian film fraternity for future campaigns"

Commenting on the association, Saket V Rao - VP Brand of Toothsi allied for the ceremony as a Smile Partner said,"toothsi, India's first and largest at-home smile makeover service, committed to providing Indians with access to convenient, irritation-free, stylish and personalised smile correction services. While given the legacy, DPIFF Awards has always been at the forefront of celebrating artistic brilliance across the Indian entertainment ecosystem, we are happy to partner for the grand ceremony"

This story is provided by Target Media. ANI will not be responsible in any way for the content of this article. (ANI/Target Media)