Get latest articles and stories on Business at LatestLY. Soon after the government announced the reduction in windfall tax on crude oil, the share prices of major oil companies have gone up. 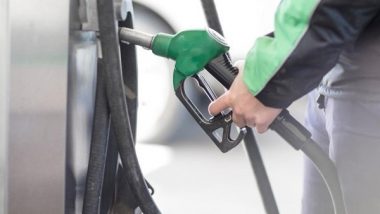 New Delhi [India], July 20 (ANI): Soon after the government announced the reduction in windfall tax on crude oil, the share prices of major oil companies have gone up.

The share prices of Oil and Natural Gas Corporation Limited (ONGC) have gone up by around 5 per cent on Wednesday. Oil India's share prices have also witnessed a sharp increase by over 6 per cent, GAIL's by 2 per cent, Bharat Petroleum's by almost 1 per cent and Reliance Industries' by over 2 per cent. Nifty Oil and Gas Index has risen by 1.6 per cent.

The central government on Wednesday cut the windfall tax on crude oil to Rs 17,000 per tonne from earlier Rs 23,250 per tonne. This move comes amid the latest decline in global crude oil prices.

A tax levied on an unforeseen or unexpectedly large profit is called windfall tax.

The new rates will be effective from today - i.e. Wednesday, a government notification said.

"Starting from July 1, GOI imposed a windfall tax on oil producers and refiners that had gained due to high overseas refining spreads and global crude prices, thus achieving super normal profits. However, due to the current fall in global crude prices, the government has decided to reverse the above decision. This move is positive for companies like Reliance, ONGC, and Chennai Petrochem Ltd." Said Punit Patni, Equity Research Analyst, Swastika Investmart Ltd.

Not just, the recently imposed special additional excise duty at Rs 13 per litre on diesel on exports has been reduced to Rs 10 now.

As exports were becoming highly remunerative, it was noticed that certain refiners were drying out their pumps in the domestic market, an official statement had said then. (ANI)