Get latest articles and stories on Entertainment at LatestLY. On Saturday, actor Alia Bhatt shared some lovely photos with husband Ranbir Kapoor on her social media account. 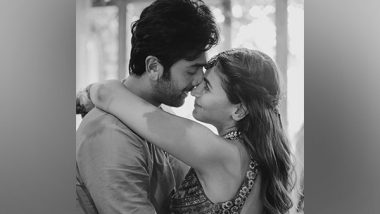 As the newly-wed couple completed one month of their marriage, taking to her Instagram handle, Alia shared a new set of photos from their mehndi function and post-wedding party.

Also Read | Karan Kundrra Registers for His Dream House in Bandra With More Than Rs 20 Crore!.

Fans and admirers once again expressed their love on the couple's candid photos, as evidenced by the abundance of heart emoticons in the comment section, which includes Alia's mother, actor Soni Razdan, and Varun Sharma.

On April 14, Alia married Ranbir Kapoor. Only close friends and family were invited to their wedding. The couple married at Ranbir's Mumbai home.