Get latest articles and stories on Entertainment at LatestLY. Hollywood star Jennifer Aniston bid adieu to 2021 with a video montage of unseen moments from the past year. 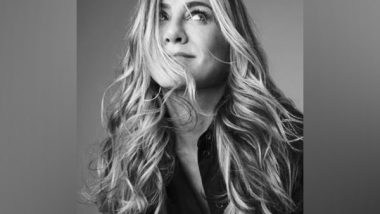 Washington [US], January 2 (ANI): Hollywood star Jennifer Aniston bid adieu to 2021 with a video montage of unseen moments from the past year.

On New Year's Eve, the 'Friends' star treated her over 39 million Instagram followers with a video collage of moments throughout the year that didn't quite make the IG main feed -- including a quick clip of herself doing a yoga-inspired leg extension while wearing a sleek black leotard, sheer tights and a pair of heels.

Also Read | Himansh Kohli: My Career Goal Is to Do a Variety of Work That Imparts Versatility to My Portfolio.

Aniston captioned the memories, "The little in-between moments of 2021 that didn't make the feed. Happy new year everybody. Now... onto the next."

R.E.M.'s classic 'It's the End of the World as We Know It (And I Feel Fine)' accompanied the video, which features cameos from a plethora of her famous friends, including BFF Courteney Cox, Aniston's 'The Morning Show' costar Reese Witherspoon and pals Jimmy Kimmel and Will Arnett.

Her celebrity friends showered her with love in the comments section.

Ali Wentworth wrote, "The feel-good movie of the year! Happy New Year Gorgeous!", while 'Hocus Pocus' star Kathy Najimy commented, "Indeed," and movie producer Aleen Keshishian gushed, "Jesus! Who knew u could do SPLITS!!!! this and u!!!!"

In December, Aniston opened up to The Hollywood Reporter about how the pandemic forced her to hunker down in her home state of California for nearly two years, and the excitement and terror she feels about jet-setting, again.

"I'm excited to get on a plane again -- and terrified as well. I haven't left California since January 2020. Courteney in Malibu is as far as I've been," Aniston, who also filmed 'The Morning Show' season 2 during the pandemic, explained of where she has been, adding, "It's Sony studios, Courteney's, the Batemans' -- there are, like, five houses I've been to."

Aniston added that while the pandemic pause was beneficial in some ways, she plans on revving up her career projects in the coming years.

"I'm about to speed up and not be free for two years. But I'll schedule it so that I get breaks in between, and not just go back to back to back. You need that time to recharge and be with your friends and your family and your dogs," she said. (ANI)