Get latest articles and stories on Entertainment at LatestLY. 'Rocky and Rani' Ranveer Singh and Alia Bhatt are both in London. The duo, on Tuesday, were snapped having a hearty meal at a restaurant in London, by none other than their director Karan Johar! 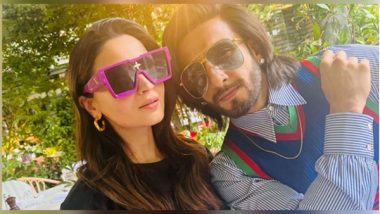 Mumbai (Maharashtra) [India], June 29 (ANI): 'Rocky and Rani' Ranveer Singh and Alia Bhatt are both in London. The duo, on Tuesday, were snapped having a hearty meal at a restaurant in London, by none other than their director Karan Johar!

Karan took to his Instagram stories to share a photo of them. Karan captioned the photo, "I found Rocky and Rani!"

Alia can be seen wearing a black oversized sweatshirt while Ranveer posed in a blue-white striped shirt that he layered with a chic Gucci sweater. Alia wore pink Louis Vuitton sunglasses and added a touch of gold with chunky earrings.

Karan is currently on a holiday in London with his mother Hiroo Johar and the kids Yash and Roohi.

Also Read | Jaideep Ahlawat Shares an Emotional Post After Visiting Irrfan Khan's Family, Says ' I Felt Like I Was Home'.

Earlier in the day, Karan's close friend and designer Manish Malhotra shared a photo with Alia and Karan and it looks like the celebrities are having a mini-reunion in London!

In the series of photos posted by Manish, Kareena Kapoor, Twinkle Khanna and Gauri Khan were also seen enjoying themselves in London.

Talking about Kareena, she has been in London for quite some time with her family. She also attended a rock concert by the British brand 'The Rolling Stone' with Saif and Taimur earlier this week.

Moving further in Manish's string of photos, he also shared a picture with Philanthropher Natasha Poonawalla and Kareena. Natasha is known to be very close to Kareena and her group of girlfriends.

After this, Manish went on and shared another stunning photo, in which he was seen posing with the 'beauties' of Bollywood, including Twinkle Khanna and Gauri Khan among others. Manish captioned the picture, "With the beauties."

Sanjay and Maheep Kapoor are also in London. They visited Sonam on Tuesday evening for dinner. On the other hand, Shilpa Shetty and her family are also vacationing in London.

Well, it definitely looks like a lot is brewing under the London sun as our celebs enjoy some time off from work. (ANI)