Get latest articles and stories on India at LatestLY. Union Minister for Road Transport and Highways Nitin Gadkari approved the proposal mandating a minimum of 6 airbags in passenger cars and said the new rule will come into effect from October 1, 2023. 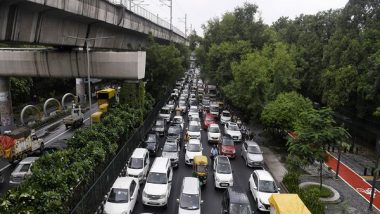 New Delhi [India], September 29 (ANI): Union Minister for Road Transport and Highways Nitin Gadkari approved the proposal mandating a minimum of 6 airbags in passenger cars and said the new rule will come into effect from October 1, 2023.

In a series of tweets Union Minister for Road Transport and Highways Nitin Gadkari said the safety of all passengers travelling in motor vehicles irrespective of their cost and variants is the foremost priority.

Also Read | Actor Jatin Goswami Has Been Roped in to Play the Main Antagonist in … – Latest Tweet by IANS India.

"Considering the global supply chain constraints being faced by the auto industry and its impact on the macroeconomic scenario, it has been decided to implement the proposal mandating a minimum of 6 Airbags in Passenger Cars (M-1 Category) w.e.f 01st October 2023," tweeted Gadkari.

Earlier in order to enhance the safety of occupants of the motor vehicle against lateral impact, it had been decided to enhance safety features by amending the Central Motor Vehicles Rules (CMVR), 1989.

A draft notification had been issued on January 14 2022.

Earlier on September 6, Union Minister Nitin Gadkari highlighted the importance of seatbelts in a car and said that it would be mandatory for all the passengers in a car to wear them.

Sharing a video from an event, the Union Minister said that seatbelts will be mandated.

"It will now be mandatory for all the people sitting in the car to wear a seat belt," tweeted Union Minister Nitin Gadkari.

In the video, he also highlighted that the safety beeps will now be present for rare seats along with the front seats which will buzz if one doesn't put on a seat belt.

His remarks came after well-known industrialist and former Tata Sons chairman Mistry died in a road accident near Mumbai on Sunday evening. Reports of him not wearing the rare seat belt soon made rounds after the accident.

According to Palghar Police, Mistry was travelling from Ahmedabad to Mumbai when his car hit the divider. There were four people in the car. Two died on the spot, including Mistry, while the other two were shifted to hospital. (ANI)