The Bharatiya Janata Party has sought the resignation of Chief Minister Mamata Banerjee over the Birbhum arson incident and demanded an investigation into the incident by central agencies. 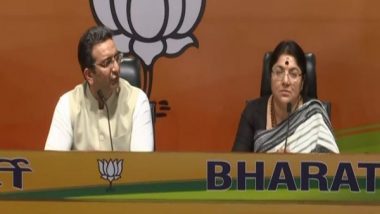 New Delhi, March 23: The Bharatiya Janata Party has sought the resignation of Chief Minister Mamata Banerjee over the Birbhum arson incident and demanded an investigation into the incident by central agencies.

As many as eight people were burnt to death in the Rampurhat area of West Bengal's Birbhum on Tuesday after a mob allegedly set houses on fire following the killing of Trinamool Congress leader Bahadur Shaikh. Birbhum Violence: Home Ministry Seeks Report From West Bengal Government on Killing of 8 People in Birbhum.

"Locals tells us that about 20 people have been killed there but no one knows the actual number because no one is being allowed to enter in Birbhum. There is a need for an independent impartial inquiry into the matter. CBI should be handed over the case," said Locket Chatterjee, BJP MP from Hooghly.

"National Investigation Team (NIA) should also be sent to West Bengal as the whole state is sitting on the pile of gunpowder," she added alleging the Law and Order failure in West Bengal.

Demanding resignation from CM Mamata Banerjee, BJP leader Gaurav Bhatia said that "She has lost the trust of people in the state. Hence, she should resign."

"Law and Order have failed in West Bengal. Attempts are being made to eradicate Democracy. She is responsible for the Birbhum incident. The goons of Trinamool Congress are destroying the justice system of the state," said Bhatia.

Bhatia claimed that the house in Birbhum was set on fire after some people including women and children were locked inside that house. "Even firefighters were stopped from doing their work," Bhatia alleged.

"The Home Minister has taken cognizance of the matter. He directed Chief Secretary to seek a report within 72 hours. After which a team comprising MPs of other states will go there to review the law and order situation," said Chatterjee.

Director-General of Police (DGP) West Bengal, Manoj Malviya informed that 11 arrests have been made in the case so far. He further informed that Bahadur Shaikh's murder was reported last night, an hour after which 7-8 houses nearby had caught fire. A special investigation team has been formed to probe the matter.