Get latest articles and stories on India at LatestLY. BJP Lok Sabha MP Bandi Sanjay Kumar on Sunday said that BJP will come to power in the state in the upcoming Assembly polls as people are tired of Telangana Rashtra Samithi's dynastic politics. 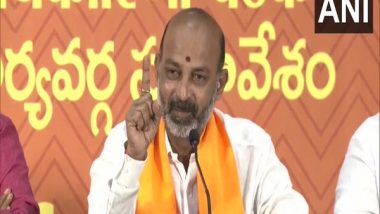 "We demanded a separate state for ensuring proper supply of water, jobs and funds. However, it is now seen that whatever the people of Telangana dreamed of, is not being fulfilled. When it comes to water projects, we all know about Kaleshwaram Project. Initially, the budget was 30,000 to 40,000 crores rupees but it has increased to Rs 1 lakh crores. Chief Minister K Chandrashekar Rao has done corruption in the project," he alleged.

Kalvakuntla Chandrashekar Rao, often referred to by his initials KCR, is the Chief Minister of Telangana since June 2014. His son, KT Rama Rao is a legislator from Sircilla and is the cabinet minister for IT, Municipal Administration and Urban Development. His daughter, Kavitha, served as MP from Nizamabad and currently serving as a Member of the Legislative Council, Nizamabad since 2020. His nephew, Harish Rao, is MLA for Siddipet and Telangana's cabinet minister for finance.

The entire city of Hyderabad has donned a saffron hue with the BJP flags and banners ahead of the party's mega show. The posters showcase the achievement of the central government. Every nook and cranny of the city is decked up with big cutouts and banners of top BJP leaders. (ANI)