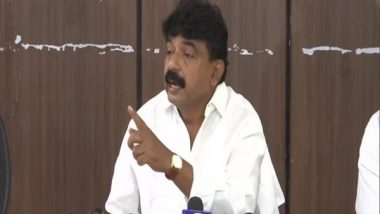 Talking to media persons, he said the Chief Minister YS Jagan Mohan Reddy is upholding social justice and giving a prominent role to the OBCs, SCs, STs and minorities in all sectors and following the reservation provisions.

He alleged that weaker sections were not given adequate representation by the TDP leader.

The Minister said Naidu has no moral right to speak on the downtrodden communities.

"Naidu uses backward classes only during the elections as a vote bank and does not care for them after gaining power," Venkataramaiah alleged.

He said the opposition could not find any real issues to criticise the Jagan Mohan Reddy government due to good governance over the past two years.

Asked about the arrest of TDP leader Devineni Umamaheswara Rao, Venkataramaiah alleged that he tried to create turmoil in Mylavaram.

"Those who had been attacked by his men have filed complaints and the police have registered cases based on the complaint of the victims. Devineni Uma has been involved in illegal mining during the TDP regime, but now he is trying to rub that on YSRCP MLA to divert the attention of people and gain sympathy," he alleged. (ANI)