Get latest articles and stories on India at LatestLY. After being elected as the Legislative Party leader, Bharatiya Janata Party (BJP) leader Manik Saha on Saturday thanked the top BJP leadership for announcing him as the next Tripura Chief Minister. 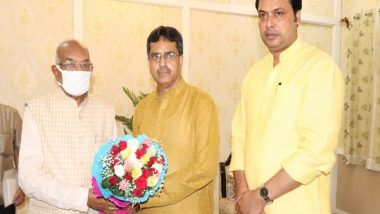 Agartala (Tripura) [India], May 14 (ANI): After being elected as the Legislative Party leader, Bharatiya Janata Party (BJP) leader Manik Saha on Saturday thanked the top BJP leadership for announcing him as the next Tripura Chief Minister.

Taking to Twitter, Saha said, "I would like to thank and express my gratitude to Prime Minister Narendra Modi ji, BJP National President JP Nadda ji, Union Home Minister Amit Shah ji and BJP top leadership for giving me an opportunity to serve the people of Tripura state."

"Being elected as Legislative Party Leader met the Governor at Raj Bhavan and submitted the claim to form the government with the letter of support from my party legislators," he said.

Dr Manik Saha, a Rajya Sabha MP, will be the next chief minister of Tripura in place of Biplab Kumar Deb who resigned from the post hours earlier.

Saha, who is also chief of BJP in Tripura, was elected leader of the BJP legislature party on Saturday.

Deb resigned from his post in fast-paced political developments in the state that will face polls early next year.

Deb said after submitting his resignation to State Governor Satyadeo Narain Arya that he had wholeheartedly served the people of the state.

"I thank Central leadership and people of Tripura for giving me the responsibility to serve Tripura as a Chief Minister. I have wholeheartedly served my State and will always work for the betterment of my State. Tripura shall definitely march ahead in the path of development. Jai Hind," Deb said in a tweet.

"Many congratulations to Dr Manik Saha ji for being elected the leader of Tripura BJP Legislature Party. I am sure that Tripura will reach new heights of development under the guidance and leadership of respected Prime Minister Narendra Modi ji," Bhupender Yadav said in a tweet.

Deb also extended his best wishes to Saha on his new role.

"Congratulations and best wishes to Dr Manik Saha ji on being elected as the legislature party leader. I believe under PM Narendra Modi Ji's vision and leadership Tripura will prosper," he said.Dr Saha, a Professor of Dental Surgery, joined the BJP in 2016 from the Congress. He was appointed state BJP president in 2018. Dr Saha had been elected to the upper house in the biennial elections held earlier this year.

Sources in BJP said outgoing chief Minister Biplab Deb is likely to be brought to the Rajya Sabha. It is also being said that Biplab will be asked to take up the post of the party president of Tripura.

Deb had taken oath as the first Chief Minister of Bharatiya Janata Party in Tripura in 2018 ending the 25-year-rule of the Communist Party of India in Tripura.

Sources said that the BJP wanted to go with a fresh face in the assembly polls. (ANI)