Get latest articles and stories on India at LatestLY. Congress leader Rahul Gandhi will hold a meeting today with the party's General Secretaries, state in-charges, Pradesh Congress Committee chiefs and Congress Legislative Party leaders at around 10 am. 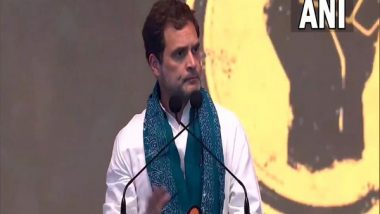 The meeting takes place on the second day of the ongoing 3-day Chintan Shivir here in Udaipur.

On the first day of the Shivir, party interim president Sonia Gandhi addressed the leaders who were invited to the event and also hit out at the ruling BJP at the Centre.

On the agenda of the party are discussions on 'communal polarization', farmers' issues, and strengthening the party for the upcoming elections. (ANI)