The bypolls in Tripura were crucial for Chief Minister Dr Manik Saha who replaced Biplab Kumar Deb last month. The dentist-turned politician himself is a candidate and is fighting his first-ever direct election to save his CM seat. 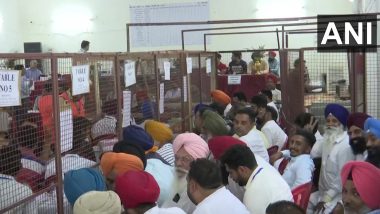 New Delhi, June 26: The counting of votes on Sunday is underway amid tight security for the bypolls of three Lok Sabha seats and seven assembly seats spread across Delhi and five other states. The elections for the bypolls were held on June 23.

The seven assembly seats are spread across Tripura, Jharkhand, Andhra Pradesh and Delhi while the three Lok Sabha seats are in Uttar Pradesh's Rampur and Azamgarh and Punjab' Sangrur. In Tripura, assembly bypoll was held in Agartala, Jubarajnagar, Surma and Town Bardowali.

The other constituencies where assembly bypolls were held were Rajinder Nagar in Delhi, Mandar in Jharkhand's Ranchi district and Atmakuru in Andhra Pradesh. Lok Sabha by-elections were held in Rampur and Azamgarh constituencies in Uttar Pradesh and Sangrur seat in Punjab. UP Lok Sabha By-Election Results 2022: Mohammed Asim Raja of SP Leading From Rampur, Dinesh Lal Yadav of BJP From Azamgarh Seat.

The bypolls were necessitated in these seats due to the resignations of the legislators in two seats, disqualification of an MLA in one, and the death of one of the MLAs midterm.

The bypolls in Tripura were crucial for Chief Minister Dr Manik Saha who replaced Biplab Kumar Deb last month. The dentist-turned politician himself is a candidate and is fighting his first-ever direct election to save his CM seat.

The bye-elections to the Azamgarh seat were necessitated due to the resignation of Samajwadi Party chief Akhilesh Yadav, who was elected to the Uttar Pradesh Legislative Assembly as an MLA in the elections earlier this year.

Seats fell vacant in Azamgarh and Rampur after Samajwadi Party (SP) leaders Akhilesh Yadav and Azam Khan resigned as MPs from the seats after winning in the 2022 Assembly elections. Akhilesh was elected as an MLA from the Karhal assembly seat while Azam Khan was elected from the Rampur Sadar constituency. Bypoll Results 2022 Live Updates: Fate of 3 Lok Sabha Seats and 7 Assembly Seats To Be Decided Today.

The Delhi's Rajinder Nagar seat remained vacated after the AAP MP Raghav Chadha was nominated for the Rajya Sabha from Punjab on March 21.