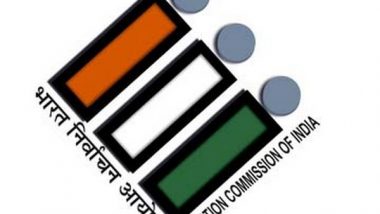 New Delhi, May 1: The Election Commission of India (ECI) has approached the Supreme Court challenging the Madras High Court order that lambasted the panel for failure to maintain Covid protocol during poll campaigns and said it "should be put up on murder charges" for being the "most irresponsible institution."

The Madras High Court "being an independent constitutional authority made serious allegations of murder on another independent constitutional authority without any basis, which has ultimately dented both the institutions," the Election Commission stated. Election Commission Approaches Supreme Court Over ‘Murder Charges’ Remark by Madras HC for Failure To Maintain COVID-19 Protocol During Poll Campaigns.

The appeal of the poll panel in the top court also mentioned that, by April 30 order of Madras High Court which had refused to entertain its petition seeking to restrain the media from publishing the court's oral observations blaming it for the rise in Covid-19 cases.

The High Court's oral observation had come on a petition filed by Tamil Nadu minister MR Vijayabhaskar, who sought directions to the ECI to ensure fair counting of votes. The High Court came down heavily on the Election Commission for not stopping political parties from violating the Covid protocol in their rallies for Assembly elections. It had also threatened to stop the counting of assembly poll votes slated for May 2.