Get latest articles and stories on India at LatestLY. Congress G23 leaders were able to successfully push their demand of reviving the party's Parliamentary Board at the Udaipur Chintan Shivir, according to party sources. 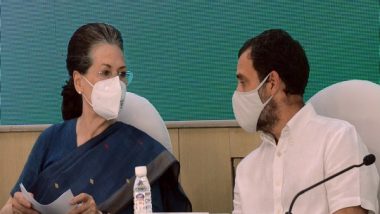 New Delhi [India], May 15 (ANI): Congress G23 leaders were able to successfully push their demand of reviving the party's Parliamentary Board at the Udaipur Chintan Shivir, according to party sources.

"Congress Party Parliamentary Board will be formed, G23 leaders had demanded that the Board should be formed," said party sources.

A key Congress panel at the party's Chintan Shivir here has favoured reservation in the private sector and has expressed support for demands for a caste census.

The party panel on social justice said it will recommend reserving 50 per cent seats at all levels within the organization for weaker sections including the Congress Working Committee.

It is also inclined to recommend reservations for OBCs in the assembly and the Parliament.

Congress leaders Salman Khurshid and K Raju told the media that organizational reforms are needed to reaffirm the message about the party's commitment to the welfare of SCs, STs, OBCs and minorities.

The recommendations of the panel will be considered by the Congress Working Committee before a final decision.

Meanwhile, party sources also informed that Congress leader Rahul Gandhi will travel from Kashmir to Kanyakumari in the next year, most of it will be 'Padayatra'. (ANI)