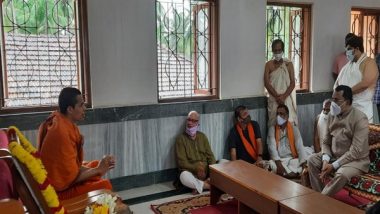 Swamiji was the spiritual and administrative head of Shree Gokarn Partagal Jeevottam Math who died on July 19.

During his visit, Pillai met Vidhyadheesh Theerth disciple and successor of Srimad Vidhyadhiraj Teerth Sripad Vader Swamiji and expressed his deep grief on the death of Swamiji.

"The state of Goa has lost a true sanyasi in every sense of that term and is an irreparable loss. Swamiji tirelessly worked for spiritual upliftment and served humanity through education, healthcare and service to the needy. His passing leaves behind a deep spiritual void," Pillai said.

The Governor paid his tributes to the samadhi of Swamiji and also took the blessings of the Ramdev and Vir Vitthal gods whose temples are situated in the Math Complex.

The Partagal Math is one of the three religious orders of the Gowd Saraswat Brahmin (GSB) community. (ANI)