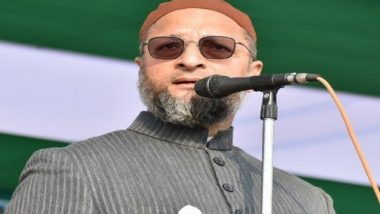 Taking to Twitter, Owaisi also referred to the RSS chief's earlier statement claiming "People of India have the same DNA", and asked if everybody's DNA is the same, then why is Bhagwat keeping a count about religion-based population.

"RSS's Bhagwat says there's "organised attempt to increase Muslim population since 1930"-- 1. If all our DNA is same, why keep count?; 2. Indian Muslim population growth rate has seen sharpest decline between 1950-2011 Sangh has Zero brains, 100 per cent hate towards Muslims," he tweeted.

"Sangh is addicted to anti-Muslim hate and poisoned society with it. All of Bhagwat's drama about "we are one" earlier this month must have discomfited his followers too much. So he had to get back to demonising Muslims and lying. Hindutva should have no place in modern India,' he said in another tweet.

On Wednesday, while speaking at a public event in Guwahati, the RSS chief said there has been an "organised attempt" to increase the Muslim population since 1930, "with a motive of establishing their dominance and make this country Pakistan".

"It was planned for Punjab, Sindh, Assam and Bengal and it succeeded to a certain extent," he said.

Earlier on July 4, Bhagwat while addressing at the launch of the book 'The Meetings of Minds: A Bridging Initiative, written by Dr Khawaja Iftikhar Ahmed' said, "the concept of Hindu-Muslim unity is misquoted because there is no difference between them as it has been proven that we are the descendants of the same ancestors from the last 40,000 years. People of India have the same DNA." (ANI)