Get latest articles and stories on India at LatestLY. Karnataka's tableau for the Republic Day parade in New Delhi is themed 'Karnataka, the cradle of traditional handicrafts'. 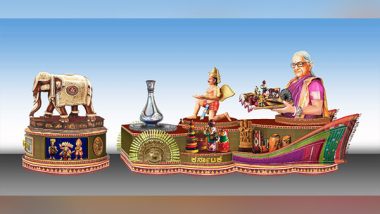 As per information, the then Department of Information and Publicity (DIP) was assigned the job of making the tableau on behalf of the state and the DIP first participated in the Republic Day Parade in New Delhi in 1972.

This is also the 13th consecutive time that the state's tableau has been selected and out of the 12 states that have been selected Karnataka is the only state from South India to feature on the Republic Day parade.

The lyrics and music have been done by Praveen D Rao, which has been exclusively prepared for the tableau, stated the Karnataka government. (ANI)