A day after Digvijaya Singh asked the government for proof of the 2019 surgical strike against Pakistan, Congress president Mallikarjun Kharge on Tuesday distanced himself from his party colleague's statement and said the Congress stands with the Indian Army and had immense respect for the Army. 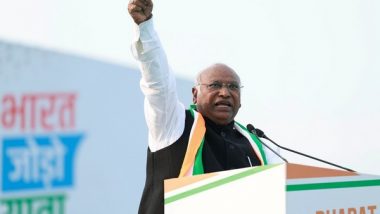 New Delhi, January 24: A day after Digvijaya Singh asked the government for proof of the 2019 surgical strike against Pakistan, Congress president Mallikarjun Kharge on Tuesday distanced himself from his party colleague's statement and said the Congress stands with the Indian Army and had immense respect for the Army.

"Congress has already released an official statement in the matter. They have clearly stated their stance on the same," Kharge said. "We have already clarified that the party stands with the Army. We have always been working for the country and will keep doing the same. We have immense respect for our Army," Kharge said. Rahul Gandhi Firefights Surgical Strike Row, Says ‘Don’t Agree With Digvijaya Singh’s Views’.

Addressing a press conference in Jammu today Congress MP Rahul Gandhi also distanced himself from the former Madhya Pradesh Singh's remarks. "We don't appreciate Digvijaya Singh's personal views. His views are outlying views. We are absolutely clear that the Armed Forces do their job exceptionally well and they do not need to provide proof of that," the Congress MP said. Congress Leader Digvijaya Singh Says No Proof of India’s Surgical Strike Against Pakistan.

Digvijay Singh had on Monday said that while the BJP government at the Centre claims to have carried out a surgical strike against Pakistan, there was no proof of it.

"They (Centre) talk about surgical strikes and that they have killed so many of the terrorists but there is no proof," Singh had said in his address in Jammu during the ongoing Bharat Jodo Yatra.

"Surgical strikes were carried out before 2014 by (Congress-led) UPA government. Congress has supported and will continue to support all military actions in national interest," Jairam Ramesh said.

The former Madhya Pradesh chief minister also earlier today attempted to put an end to the row. "I have got the greatest regard for the Defence forces" as Singh marched on along with other padayatris.

On February 14, 2019, a CRPF convoy was attacked by militants in Kashmir's Pulwama, in which 44 Indian jawans lost their lives. Striking back, on February 26, 2019, Indian Air Force fighter jets targetted an advanced terror training camp of Jaish-e-Mohammed in Pakistan's Balakot.