Taking a jibe at West Bengal Chief Minister Mamata Banerjee over post-poll violence in the state, BJP leader Roopa Ganguly said the Trinamool Congress (TMC) chief is dreaming of running the country while she is unable to fix a single matter in the state. 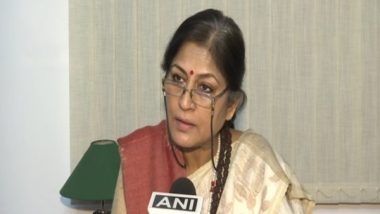 Kolkata, July 22: Taking a jibe at West Bengal Chief Minister Mamata Banerjee over post-poll violence in the state, BJP leader Roopa Ganguly said the Trinamool Congress (TMC) chief is dreaming of running the country while she is unable to fix a single matter in the state.

The BJP leader alleged that 35,000 women were tortured during the post-poll violence in the state."You (Mamata) seem to think that the entire people of India do not know what kind of violence happened in West Bengal. Mamata Banerjee has been in power for the last 10 years and her tenure still continues.

Whatever has happened there since the tenure of Mamata Banerjee in 2015-16, is it correct? About 35,000 women have been tortured post the recent assembly polls," she said while speaking to ANI.

She further raised concerns over Mamata's selection of August 16 as the date she chose to celebrate as Khela Diwas, which happens to coincide with the date of Calcutta killings before Independence.

"See, first of all, Mamata Banerjee lies a lot. The circumstances that she has created in Bengal never happened in the whole of India. Why did she choose August 16 to be celebrated as Khela Diwas? That is also a matter of concern because there is a dark history associated with that day. Many people were killed," said Ganguly.

She added, "I would like to tell the general public that no attention should be paid to her words. She is the one who is not able to fix a single thing in West Bengal and is dreaming of running the country."

Ganguly further talked about the Citizenship Amendment Act (CAA) and the National Register of Citizens (NRC) and termed them as among the "best laws in the country".

"CAA and NRC are two of the best laws in our country. Everyone knows that when the partition happened, Bangladesh went inside Pakistan. It was only because of Shyama Prasad Mookerjee, we were able to separate West Bengal from Bangladesh. Otherwise, it too would have gone inside Pakistan."

"There is a majority of Hindus here, hence it is called Hindustan. The Muslims are in majority there, hence the name is Pakistan. There are a lot of atrocities being committed against the people in Pakistan and Bangladesh. If we do not give place to Hindus being exploited there, then to whom else will we give space?" she questioned.

She further said, "If they flee from their own country, they should have someplace to go. There is one country in the whole world where they can go, which is India. That is why there is CAA."