Punjab Police on Sunday arrested a man and his friend allegedly for killing his sister, solving a murder case over the span of two weeks. 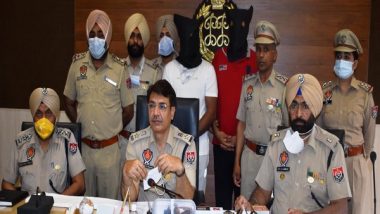 Harpreet Singh has been arrested by the Punjab police for the murder of his sister. (Photo/ANI)

Hoshiarpur (Punjab) [India], May 9 (ANI): Punjab Police on Sunday arrested a man and his friend allegedly for killing his sister, solving a murder case over the span of two weeks.

The victim, Manpreet's bullet-ridden body was found on April 22 at Sikri Adda in Bullowal Police Station here. Her younger brother, Harpreet Singh and his accomplice Iqbal Singh have been arrested and the weapon and three SUVs used in the crime have been seized.

According to Senior Superintendent of Police Navjot Singh Mahal, nine bullets were found in Manpreet's body after which a case under sections 302, 34 IPC and 25, 54 and 59 of the Arms Act was registered against unidentified persons.

Two special teams were constituted to crack this heinous crime.

Harpreet was the kingpin of the crime who hatched the conspiracy to kill his sister Manpreet, who married against the wishes of the family nearly eight years ago and was living at her in-law's house in Khadiala Sainian, the police said.

Manpreet had filed for a divorce from her husband Pawandeep Singh and wanted to rejoin her family which was not acceptable to Harpreet, which is why he conspired to kill her, the police added.

Mahal informed that Manpreet had been strangled in the back of a vehicle by her brother while Iqbal drove.

"When Manpreet got unconscious, Harpreet pulled her out of car near Sikri Adda and pumped nine bullets from .32 bore revolver and both accused fled away by dumping body on roadside," the SSP added. (ANI)