India News | MHA Writes to States, UTs to Observe Anti-terrorism Day on May 21

Get latest articles and stories on India at LatestLY. The Ministry of Home Affairs (MHA) has written to all the states, Union Territories (UTs), Central government departments as well as ministries to observe anti-terrorism day on May 21 in a "befitting manner". 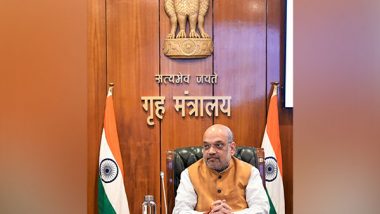 New Delhi [India], May 14 (ANI): The Ministry of Home Affairs (MHA) has written to all the states, Union Territories (UTs), Central government departments as well as ministries to observe anti-terrorism day on May 21 in a "befitting manner".

Noting the importance of the day, the letter states, "Every year 21st May is observed as Anti-Terrorism Day. The objective behind observance of this day is to wean away from the youth from terrorism and the cult of violence by highlighting the sufferings of common people and showing as to how it is prejudicial to the national interest."

It also proposed that the anti-terrorism pledge may be taken in all government offices, public sector undertakings, and other public institutions.

Keeping in view the safety of participants and organizers and to avoid public gatherings, it said, officials may be advised to take anti-terrorism pledge solemnly in their rooms and offices itself.

In addition, considering the importance and solemnity of the occasion, the letter stated, "innovative ways of propagating the message of anti-terrorism through digital and social medial platforms, may also be considered".

"Accordingly, I request you to kindly observe the Anti-Terrorism Day in a befitting manner," mentioned the concerned official issuing the letter from MHA.

To achieve the above objective various anti-terrorism programmes and drives had been organized in the past.

In view of the ongoing COVID- 19 pandemic, it further said, it is imperative to follow the preventive measures such as maintaining social distancing, and wearing masks as prescribed and recommended by the Ministry of Health and Family Welfare while organizing the appropriate programme for the occasion.

The letter, while pointing out that this year 21st May falls on Saturday, a closed holiday for Central Government offices, said: "To avoid inconvenience to the employees who have to travel a long distance from suburbs or cities to come to the office on Saturday, it has been decided that the 'pledge taking ceremony' in the offices of the Central Government may be held on Friday, the 20th May 2022".