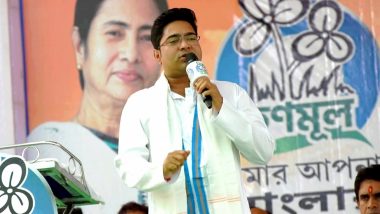 Kolkata, June 5: TMC supremo Mamata Banerjee on Saturday elevated MP Abhishek Banerjee as the party's all India general secretary, a senior leader here said. Addressing a press meet, TMC leader Partha Chatterjee also said that the working committee has decided that one person will be allowed to hold just one post in the party, and the core committee has duly given its approval. TMC MP Abhishek Banerjee Defends Alapan Bandyopadhyay, Claims All Political Parties Violated COVID-19 Norms During Elections.

"Our party chief Mamata Banerjee has nominated MP Abhishek Banerjee as the all India general secretary of the TMC," Chatterjee said, following two crucial meetings earlier in the day. Abhishek, nephew of the party supremo, will be replacing Subrata Bakshi as the national general secretary, while actor-turned-TMC leader Sayoni Ghosh has been made the youth wing president - a post earlier held by the MP. Bengal CM Mamata Banerjee Visits Abhishek Banerjee's Residence Ahead of CBI Examination in Coal Theft Case.

Chatterjee further stated that no discussion was held on turncoats, who had quit the TMC to join the BJP ahead of the assembly polls, and were now willing to return to the party fold.