As the ban on single-use plastic came into effect on Friday, the Municipal Corporation of Delhi (MCD) seized 689.01 kilograms of such items and issued 368 challans in its jurisdiction today. 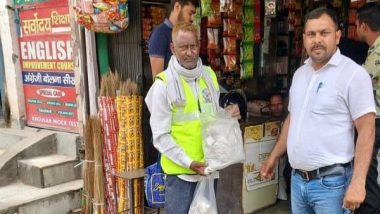 New Delhi, July: As the ban on single-use plastic came into effect on Friday, the Municipal Corporation of Delhi (MCD) seized 689.01 kilograms of such items and issued 368 challans in its jurisdiction today.

The civic body officials informed that a total of 125 enforcement teams have been constituted at a zonal level to eliminate stocking, sale, and usage of banned items.

"Several teams at the zonal level are also spreading awareness, amongst the public, street vendors, shopkeepers, market associations, etc. regarding usage of Jute, Cloth, permitted bags in place of Single-Use Plastic in the institutions and fruit mandis falling under the jurisdiction of the concerned Municipal Ward," the MCD officials said. Bihar Shocker: Government School Teacher Booked for Allegedly Molesting Female Teacher and Students in Gaya After PMO's Intervention.

Under the Plastic Waste Management Amendment Rules, 2021, the manufacture, import, storage, distribution, sale and use of any single-use plastic has been banned.

The trade of single-use plastic across the country is estimated to be around 20 thousand crores annually.

A National Control Room has been established in the Central Pollution Control Board to monitor the enforcement of the ban, besides asking the state boards to undertake comprehensive Awareness activities including social media campaigns, and interactive meetings with industries, colleges, schools, and other institutions.

The state boards have further been directed to intensify inspections of industrial and commercial establishments for effective implementation of the ban.

In line with the clarion call given by Prime Minister Narendra Modi to phase out single-use plastic items by 2022, the environment ministry notified the Plastic Waste Management Amendment Rules, 2021, on 12 August 2021. (ANI)