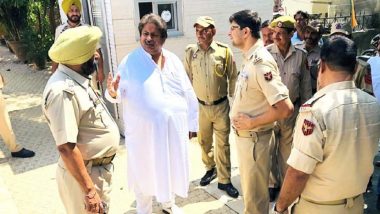 Jammu, October 17: A senior Congress leader on Saturday claimed that the people of Jammu and Kashmir were fed up with the "bluffs and failures" of the BJP and would teach the saffron party a lesson in the next assembly elections in the Union Territory.

Vice President of Pradesh Congress Committee Raman Bhalla also alleged that the BJP had gained power after "betrayal of the mandate" and its experiments cost too much to the people of Jammu and Kashmir who lost their identity as a state besides all safeguards to their land and jobs. Also Read | Kangana Ranaut Shares Her Navratri Celebration Photos; Actress Inform Fans about the Fresh FIR Filed Against Her (Read Tweet).

"The people will not spare BJP for its total failure and arbitrary and undemocratic decisions besides imposing heavy taxes, price hike and economic crises and failures on health and medicare during the COVID-19 pandemic, as a result people died due to shortage of oxygen in hospitals," Bhalla alleged.

The Congress leader was part of a party delegation headed by PCC president G A Mir on a tour of Doda and Kishtwar districts, where they visited the house of party colleague and former minister Mohammad Sharief Niaz who died on October 12 and also met party workers and local residents.

"The people are fed up with the bluffs and failures of the BJP and will teach the party a lesson in the next assembly elections. The only achievement of BJP is to create division and hatred in society which has disturbed our age old secular and social fabric," he claimed and asked the people to maintain their brotherhood and unity and defeat all provocations to disturb peace.

Mir said the Congress focused on giving due political share and faster development of remote and backward areas of Doda and other areas of Chenab region during its government in the erstwhile state and at the Centre. "It was the Congress which gave due share in political power and ensured faster development on priority basis of the backward and under developed Chenab region," he said.

Mir said his party would emerge stronger to gain power in the next elections in Jammu and Kashmir and would always give due representation and special focus to the backward and underdeveloped regions of Jammu and Kashmir.