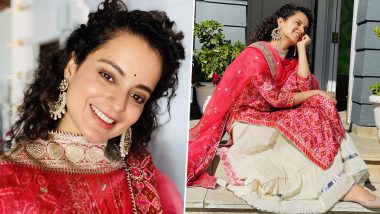 Bollywood actress Kangana Ranaut on Saturday claimed that a fresh FIR has been filed against her by the Shiv Sena government in Maharashtra. Kangana reacted saying the state government seems to be obsessing over her. The actress took to her verified Twitter account to share photographs of her Navaratri look this year while taking a sarcastic jibe at the state government. "Who all are fasting on Navratris? Pictures clicked from today's celebrations as I am also fasting, meanwhile another FIR filed against me, Pappu sena in Maharashtra seems to be obsessing over me, don't miss me so much I will be there soon," she captioned. Navratri 2020: Kangana Ranaut Beautifully Explains the Significance of the Holy Festival (Read Tweet)

A Mumbai court has ordered the city police to investigate a complaint against Kangana and her sister Rangoli Chandel for spreading communal hatred and falsehoods, officials said here on Saturday. The order by Bandra 12th Court Magistrate Jaidev Ghule came in a plea by Munawwarali, alias Sahil A Sayyed, a Bollywood casting director, said his lawyer Ravish F Zamindar. Kangana Ranaut to Face Legal Trouble! Bandra Magistrate Court Orders FIR Against the Actress for Trying to Create Hatred and Communal Tensions

Who all are fasting on Navratris? Pictures clicked from today’s celebrations as I am also fasting, meanwhile another FIR filed against me, Pappu sena in Maharashtra seems to be obsessing over me, don’t miss me so much I will be there soon ❤️#Navratri pic.twitter.com/qRW8HVNf0F

Among other things, Sayyed accused Kangana and Rangoli of defaming Bollywood, portraying people working in the industry in a bad light with her claims of nepotism, drug addiction, and communal bias, besides attempting to create a rift between artistes of different communities, insulting religions, and calling them murderers on social media and through public statements.

(The above story first appeared on LatestLY on Oct 17, 2020 06:51 PM IST. For more news and updates on politics, world, sports, entertainment and lifestyle, log on to our website latestly.com).