Get latest articles and stories on India at LatestLY. Bharatiya Janata Party (BJP) MP Ravi Shankar Prasad on Sunday said that Prime Minister Narendra Modi advised the party workers to learn from the mistakes of other political parties which were in power in the country in the past but now are in "decline". 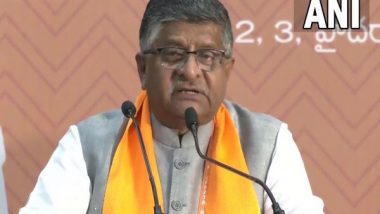 Hyderabad (Telangana) [India], July 3 (ANI): Bharatiya Janata Party (BJP) MP Ravi Shankar Prasad on Sunday said that Prime Minister Narendra Modi advised the party workers to learn from the mistakes of other political parties which were in power in the country in the past but now are in "decline".

"PM Modi spoke about various parties that are fighting for their existence & that neither we should laugh at them nor mock them. Instead, we should learn from them and refrain from committing such acts that they have committed," Prasad said.

"PM Modi noted the rapid expansion of the BJP over the years in the country (during the BJP's National Executive Committee meeting in Hyderabad). He very proudly conveyed his profound appreciation of courage of all party workers in states like Telangana, WB, Kerala," said Prasad.

PM Modi asserted on Sunday that the party's goal should be "fulfilment of all" as against the opposition's politics of appeasement.

"In states where they (party workers) are suffering enormous hardship and yet remain firm to ideology... PM Modi stated that our aim should be to make it clear that our thought process should be from appeasement to fulfilment," he added.

"Since ancient times, land of Maa Bhagyalaxmi has been called Bhagyanagar. Fate of Bhagyanagar is about to change, to improve. Telangana is calling for BJP," BJP leader Dinesh Sharma said after day 2 of BJP's national executive meeting at Hyderabad convention centre.

The BJP's initiative comes at a time when Telangana is heading for Assembly polls in 2023 and the BJP sees a huge prospect of bringing down the ruling Telangana Rashtra Samithi government.

This two-day meeting of the BJP has seen the Telangana Rashtra Samithi (TRS) leadership taking potshots at the Modi government especially when the leaders talk about development.

Union Home Minister Amit Shah, who made several moves to resolve the long-pending issues of the Northeastern states, on Sunday said that the BJP has found a "permanent address" in the region.

The Home Minister made the remarks while speaking at the BJP national executive meeting during his address on the political resolution.

"You know that the Opposition has been objecting to a number of things on a number of reforms by the Modi government including the CAA. There has been a delay but we are committed to implementing CAA and the rules will be formed," Sarma said.