India News | Policeman Shot at by Terrorists in J-K's Anantnag

Get latest articles and stories on India at LatestLY. A police personnel was shot at by terrorists at Hugam Srigufwara area of Anantnag district in Jammu and Kashmir, informed the officials adding that the injured has been shifted to a hospital. 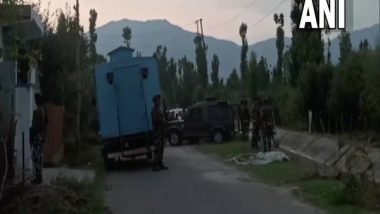 Anantnag (Jammu and Kashmir) [India], July 3 (ANI): A police personnel was shot at by terrorists at Hugam Srigufwara area of Anantnag district in Jammu and Kashmir, informed the officials adding that the injured has been shifted to a hospital.

Police received information about a terror crime in the Anantnag where terroPoliceman shot at by terrorists in J-K's Anantnagrists had fired upon police personnel. Senior cops reached the terror crime spot, according to an official statement issued by Jammu and Kashmir police.

The injured policeman has been identified as SgCt Firdous Ahmad.

Officers attending the terror crime spot learnt that SgCt Firdous Ahmad was shot at by the terrorists at his residential house in the Hugam Srigufwara area of Anantnag district.

In this terror incident, he had received gunshot injuries. Subsequently, he was shifted to SDH Bijbehara for treatment where he was referred to 92 Base Hospital Srinagar, police added.

A case has been registered in this regard under the relevant sections of law. The investigation is in progress and officers continue to work to establish the full circumstances of this terror crime.

Meanwhile, the area has been cordoned off and a search in the area is going on.

Earlier in the day, two Lashkar-e-Taiba (LeT) terrorists have been apprehended by villagers of Tuksan in Jammu and Kashmir's Reasi district.

According to the Jammu Additional Director General of Police (ADGP), the apprehended terrorists have been identified as Faizal Ahmed Dar and Talib Hussain. The Director-General of Police (DGP) announced a reward of Rs 2 lakhs for villagers.

Two AK rifles, seven grenades and a pistol were recovered, the police said.

"I salute the bravery of villagers of Tukson Dhok, Reasi, who apprehended two most-wanted terrorists. Such determination by the common man shows the end of terrorism is not far away. UT Govt to extend Rs 5 Lakh cash reward to villagers for the gallant act against terrorists and terrorism," Sinha said. (ANI)