Union Law Minister Ravi Shankar Prasad has taken a dig at opposition parties who have slammed the new intermediary guidelines concerning social media platforms and said some people were "doing politics of Twitter". 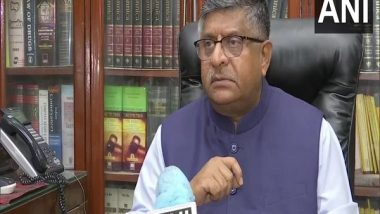 In an interview with ANI, Prasad, who is Communications, Electronics and IT Minster, said the issue concerning the new intermediary rules was between Twitter and its users.

The government has said that the microblogging platform had "deliberately chosen" not to comply with new intermediary guidelines despite being given opportunities.

Prasad, who is also Law Minister, said profit-making companies should not lecture about India's democracy.

"Some people do their politics through Twitter. I have no problem. Now they are doing politics of Twitter. Today PM is on Twitter, I am on Twitter. It is not an issue between Twitter and Government of India or BJP. It is an issue of Twitter and it's users and forum to complain in case of abuse and misuse. That is the basic distinction. Today there are 100 crore users of Twitter in India. I am happy. Let them earn money. Allow users to criticize us. Most welcome.

"But when these profit-making companies start lecturing us on democracy, I would like to ask a question. India is a democracy because it's elections are fair. We won Assam and lost Bengal recently. We have an independent judiciary that keeps us asking questions like in case of Covid. Media asks tough questions from a senior minister. That's what freedom of speech and democracy is about. These issues are important. But under garb of these you think you won't comply then it's a misplaced argument," he said.

"It is for the police to investigate and come to conclusion. But one thing I like to flag, the norm of declaring a particular tweet as manipulative or unmanipulated, why will it not apply in the Ghaziabad case. Why Twitter should also make these important standards. One is non-compliance and the other is selective flagging of tweets? What is the real issue?" he asked.

"I will surely talk about double standards. When Capitol Hill in Washington was raided, you block the Twitter account of all including the then President and when during the farmers strike, Red Fort is raided by many terrorist supporters showing naked swords and injuring many policemen and pushing them in the ditch , then it is freedom of expression?" he asked.

"If Capitol Hill is pride of America, the Red fort is pride of India where our PM hoists the national flag. You show parts of Ladakh as part of China. It takes a fortnight for us to pursue you to remove it. This isn't fair. If India is a democracy, India is equally entitled to safeguard its digital sovereignty," he added.

The minister said if half of government is on Twitter, the Prime Minister and President are on Twitter, "that shows how fair we are".

"But norms are norms. We are not for banning any platforms but you have to follow the law," he said.

Asked about guidelines having provision for identification of "first originator" on platforms such as WhatsApp, he said ordinary users will not be affected.

"We don't want all messages to be decrypted. It is my word that all ordinary users of WhatsApp can continue to use it. If any content goes viral, causing mob lynching, riots, killing, showing women in nudity, sexual exploitation of children ...only in these limited categories, you'll be asked to declare who started the mischief. If viral messages are causing mayhem here which originated from across border then who started it in India, that's all we are seeking. This is in public interest," he said. (ANI)