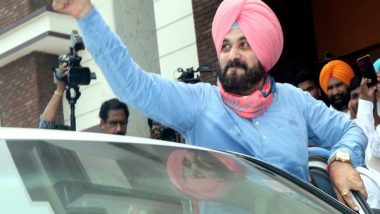 They said Sidhu has sent an invitation signed by around 65 MLAs to Punjab Chief Minister Captain Amrinder Singh.

Sidhu has also invited AICC in-charge of Punjab Harish Rawat for the programme, the sources said.

Sidhu's appointment was announced on Sunday and there has been no meeting so far between him and the Chief Minister.

Amarinder Singh's media advisor had said in a tweet on Tuesday that Sidhu had not sought time to meet the Chief Minister.

He also said that Chief Minister will not meet Sidhu "till he publicly apologises for his personally derogatory social media attacks against him".

Earlier in the day, in a show of strength, 62 MLAs, reached Sidhu's residence in Amritsar on breakfast invitation.

The MLAs at Sidhu's residence said that the party is united and that there is no need for an apology.