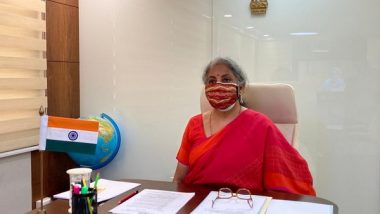 With a built area of about 600 square feet, the single storey home has a functional space comprising of a single bedroom, hall, and kitchen, with the entire ensemble being designed, developed, and realized by Tvasta's indigenous 'Concrete 3D Printing' Technology. The house was developed in collaboration with Habitat for Humanity's Terwilliger Center for Innovation in Shelter. Volunteers Who 3D-Printed Valves in Just 6 Hours and Helped Save Coronavirus Patients in Italy Get Threatened by Medical Company.

According to an official release, the concrete 3D printing technology is a 'Ready-to-Implement Methodology' with no lead time on manufacturing, which significantly reduces the construction time. This 'Made In India' technology has the potential to change the term 'building' to 'printing' in the near future. A Video of 3D Printed House can be found at the official website.

Tvasta Manufacturing Solutions is part of the new incubator of the Ministry of Housing and Urban affairs established at IIT Madras called 'ASHA Incubator.'

Addressing the inauguration virtually, Sitharaman, said, "India definitely needs such solutions which do not require much time. This technology enables building a 3D printed house in 5 days. With the Prime Minister's goal of 'Housing for All by 2022,' we have a huge challenge before us. A huge challenge of meeting that deadline and making sure that people who need houses get it at an affordable price. The Government incentives for that are available."

"The presentation made earlier by Tvasta tells me everything is Atma Nirbhar. From the idea, till the furnished house, even the design is all from India. India needs more of this... Conventional housing requires timing, material, logistics, transporting of material, and so on. But if this technology can produce houses in different locales at five days per house, it would not be a big challenge to build 100 million houses by 2022," she added.

Sitharaman further congratulated IIT Madras for encouraging innovation and bringing new concepts and ideas to life. "I think the Technology Sub-Mission, which is working under Pradhan Mantri Awas Yojana (PMAY) also has a project called 'Light House Project,' wherein in Indore, Chennai and a few other places are building 1,000 houses in each location through innovative technologies in 12 months. If the policymaker are aware of these developments that you have shown now, India is set for a bright future in terms of meeting the target for affordable houses," he added.

The Government of India has several flagship welfare schemes that address the problems of housing, sanitation, disaster-time rehabilitation, and besides projects to construct military bunkers, among others. The mandate of these is to facilitate the building and installation of several million physical structures across India.

Tvasta's primary market would be the Indian subcontinent with the focus on providing construction-related 3D Printing services and solutions for such Government welfare programs.

Lauding the work done by the Tvasta, Professor Bhaskar Ramamurthi, Director, IIT Madras, said, "This technology is the first to be beneficiary-led in the construction industry. The machine for constructing this house can be rented, like borewells rented by farmers. It provides for large-scale, high quality and also, price assurance for the customers."

Speaking on the occasion, Anoop Nambiar, Country Director (India), Terwilliger Center for Innovation in Shelter, Habitat for Humanity, said, "A widespread adoption and deployment of this technology could contribute significantly in reducing the housing gap in India and around the world."

Tvasta's 'Concrete 3D Printing' is an automated manufacturing method for constructing three-dimensional real-life structures (at all realizable scales). The technique utilizes a concrete 3D Printer - a Tvasta product - which accepts a computerized three-dimensional design file from the user and fabricates a 3D structure in a layer-by-layer manner by extruding a specialized type of concrete specifically designed for the purpose.

Further, N Venkataraman, Additional Solicitor General of India, said, "I am thankful that a startup like Tvasta is part of fulfilling this national dream of 'Housing for All.' Construction is a ten trillion industry globally and this Tvasta's technology can save 30 per cent. If this technology takes off, it will save three trillion every year, which is not a small sum."

Designs can be made for both performance and function, without having extra cost implications. This makes individual customizations and personalization possible, event at scale, for all strata of society.

Sharing the startups' vision, Adithya VS, Co-Founder and Chief Executive Officer, Tvasta Manufacturing Solutions, said, "This technology can enable deep personalization of construction for the ultimate target segment - the individual. 3D Printing can ensure that affordable, good quality housing is available to all Indians with a technology that is built in India and symbolizes Atmaribhar Bharat."

"What differentiates Tvasta from other Construction 3D Printing Firms is that Tvasta is aligned as an 'End-to-End Solutions Provider' - a solution that can be readily integrated with existent construction procedures", read the press release by the Union Ministry.

As a branch of technology that is viable and deployable, Concrete 3D Printing does seem to offer the opportunity, as never seen before, for lean, affordable, and rapid developments that possess elements for mass customizations, whilst at the same time minimizing human-induced errors and lessening carbon footprints along the way.