Get latest articles and stories on India at LatestLY. A special branch officer of the state intelligence was caught red-handed while clicking photos of documents during the BJP's national executive meeting held in Hyderabad. 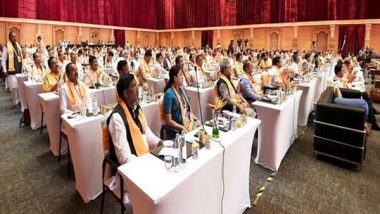 Hyderabad (Telangana) [India], July 3 (ANI): A special branch officer of the state intelligence was caught red-handed while clicking photos of documents during the BJP's national executive meeting held in Hyderabad.

The said documents were kept on a table when the incident was reported.

The documents contained details of the party's resolution and also details on the upcoming meetings at the national executive meeting.

"There is no secrecy in our party, our party is a democratic party. Our party is not a family party, whoever came was illegal, we don't do the security, it was the police department who gave it when PM comes the Karyakartas are not allowed and police takes over everything," said Reddy.

He further stated that the party's crystal in it's being and there's nothing to hide.

"Whoever comes we give info, there is nothing to hide. If KCR wants we can give the resolution to him but taking the resolution is wrong from an ongoing meeting.

Union Minister Piyush Goyal also reacted to the incident and said that the government believes in transparency.

"Our government believes in transparency, we ourselves put everything on the website, so whoever wants to come can come, there is no secret activity, we are working for the welfare of the people," said Goyal.

The political resolution moved by Home Minister Amit Shah at the Hyderabad National Executive meeting also affirmed that in the next two-three decades India will emerge as a " world leader".