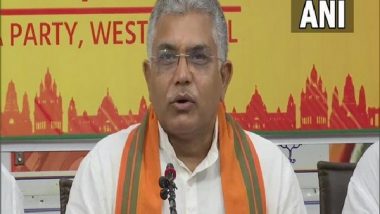 Speaking to ANI, Ghosh said, "The chances of Akhilesh winning the election are slim, therefore he has called Mamata Banerjee to campaign for him. But this is not in the interest of neither Akhilesh nor Mamata."

He also took a jibe at Banerjee and said, "Before the 2019 elections, too, the West Bengal CM had invited political leaders from across the country to the Kolkata brigade group and had fed them fish and rice; but to no avail."

"Today, Akhilesh Yadav is calling Mamata out of desperation. But how will Mamata help Akhilesh? The people of UP will not be able to understand her Hindi," Gosh added.

Further saying that the move is not in the interest of Yadav, Ghosh said that Mamata Banerjee wants to become a national leader.

"Anywhere Mamata tried outside of Bengal, she failed. She failed in Tripura and Goa, now UP is an attempt to improve her image," he said.

Gosh also alleged that Yadav did not call Banerjee for the campaign, "she herself might be coming forward to lend support."

"Nobody calls her, she just reaches everywhere because she wants to become a national leader," Gosh added.

However, the SP chief on Wednesday said that he will contest the Uttar Pradesh Assembly elections from Karhal after taking permission from Azamgarh residents. Yadav is currently a Lok Sabha MP from Azamgarh.

Elections to the 403 assembly constituencies in Uttar Pradesh will be held in seven phases starting February 10.