Legendary IPS officer Aftab Ahmed Khan - among the earliest of 'Dirty Harrys' who inspired the concept of specialised Anti-Terrorism Squads (ATS) in Maharashtra - passed away on Friday following a brief illness, a family member said. 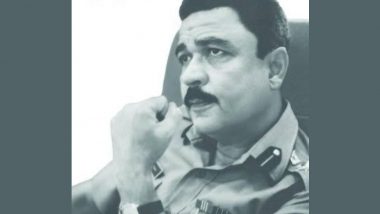 A.A. Khan, 81, breathed his last at the Kokilaben Dhirubhai Ambani Hospital around 3 p.m. surrounded by his near and dear ones.

Commissioned as an IPS officer in the Maharashtra cadre in 1963, A.A. Khan served the state police in various capacities before taking premature retirement in 1997 and entered into private security services business.

Taking a leaf from the Philadelphia and Los Angeles police's famed 'Special Weapons And Tactics' (SWAT), Khan kindled the first-ever small but highly-trained, armed and rich on intel 'ATS-style force' in 1990.

The ATS later went onto detect, probe some of the biggest cases like the Mumbai serial bomb blasts (1993) and the terror attacks (2008), besides many other terrorist incidents in the city before it branched out as a state-level specialist force.

During his days as a dashing field officer, hunting criminals, idolised by the force and commanding an excellent network of intelligence, Khan is best remembered for his daring four-hour long daylight encounter of 7 dreaded mafia leaders hiding in the residential area of Lokhandwala Complex in Andheri west, in 1991.

The operation - which raked up a huge controversy later - saw all the 7 gangsters, including Maya Dolas, Dilip Buwa, Anil Pawar and others who were heavily armed with AK-47s and other weapons, killed in the Swati Building.

Subsequently in 2007, the encounter became the subject of a major Bollywood flick, "Shootout At Lokhandwala" in which Khan played the brief role as the then Commissioner of Police S. Ramamurthi.

(The above story first appeared on LatestLY on Jan 21, 2022 07:45 PM IST. For more news and updates on politics, world, sports, entertainment and lifestyle, log on to our website latestly.com).