Get latest articles and stories on India at LatestLY. Vice President, M. Venkaiah Naidu on Saturday unveiled the statue of former Chief Minister of Tamil Nadu M Karunanidhi on the occasion of the 98th birth anniversary celebrations of the DMK leader organised by the state government in Chennai. 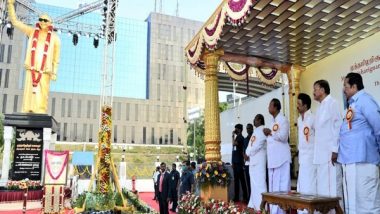 Chennai (Tamil Nadu) [India], May 28 (ANI): Vice President, M. Venkaiah Naidu on Saturday unveiled the statue of former Chief Minister of Tamil Nadu M Karunanidhi on the occasion of the 98th birth anniversary celebrations of the DMK leader organised by the state government in Chennai.

Naidu paid tributes to Karunanidhi and pointed out that he was among leaders who strengthened the country's federal character. He added that in the process, the nation emerged as a strong 'Team India'.

The Vice President observed that Karunanidhi was among such exceptional leaders who placed people at the centre of their work and helped India shape into a vibrant, progressive democracy upholding the vision contained in the Preamble of the Constitution.

Naidu termed Karunanidhi a visionary leader who focused on empowering marginalised people and those outside the circle of development. "He was an able Chief Minister who has left a lasting legacy of development and social welfare", Naidu said.

"We are quite fortunate that, after our independence in 1947, we have had, in our country, a series of illustrious Prime Ministers and Chief Ministers who have shaped the development trajectory of our great nation," Naidu said.

"Guided by the enlightened pathway shown by the Constitution- makers, these leaders at various levels, have tried to give meaning to the words in our Constitution," he added.

The Vice President also highlighted the "principle of agreeing to disagree" as the "requirements in democracy".

Stressing the need for political leaders to respect each other, the Vice President said that they should consider each other as rivals, and not as enemies.

"Irrespective of caste, creed, religion or political affiliations, we are all Indians first and we should work for the growth and development of the nation," he said.

Naidu pointed out that India is on the move and urged all political parties in different states to work for people's welfare. "If states develop, India will develop," he said. (ANI)