The plea stated that the Uttar Pradesh government has appointed an additional district magistrate to deal with the process of notices for recovering damages for loss of public property during protests against the CAA whereas the guidelines laid down by the top court stipulated that retired judges should deal with the matter. 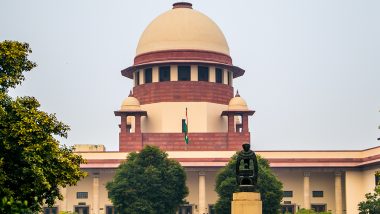 New Delhi, February 18: The Uttar Pradesh Government on Friday told the Supreme Court that it has withdrawn recovery notices issued against anti-CAA protestors to recover the damage caused to public properties. After the UP Government apprised the court about withdrawing recovery notices, a bench of Justices DY Chandrachud and Surya Kant directed the UP government to refund the recoveries made till now.

Appearing for Uttar Pradesh, Additional Advocate General Garima Prashad told the top court that the state government has withdrawn recovery notices through government orders on February 14 and February 15 in cases of alleged destruction of public property. The court said that in view of the statement given by the UP government, nothing further survives in the matter.

However, the court granted liberty to the UP government to proceed in accordance with the law that is the state legislation. The SC also clarified that the Model Code of Conduct does not stop from the state following laws. The Supreme Court had earlier asked the Uttar Pradesh government to withdraw the recovery notices issued to the alleged anti-CAA protestors in December 2019 while observing that the proceedings were contrary to the law laid down by it. Yogi Adityanath Govt Withdraws Notice to Anti-CAA Protesters Seeking To Recover Damages in Uttar Pradesh.

The bench had earlier observed that the government acted like a "complainant, adjudicator and prosecutor" by itself in conducting the proceedings to attach the properties of the accused.

The apex court was hearing a plea seeking quashing of the recovery notices issued by the Uttar Pradesh administration to recover the damage caused to public properties in connection with protests against the Citizenship (Amendment) Act in the state.

The petition was filed by advocate Parvez Arif Titu who sought direction for setting up an independent judicial enquiry to probe the incidents that occurred during the protests against the CAA-NRC in Uttar Pradesh.

Uttar Pradesh had earlier apprised the top court that 106 FIRs were registered against 833 rioters in the State and 274 recovery notices were issued against them and out of the 274 notices, recovery orders were passed in 236 while 38 cases were closed. Prashad had also revealed that these orders were passed by Additional District Magistrates. She also said that under the new law notified in 2020, claim tribunals have been constituted which are headed by retired district judges, and earlier they were headed by Additional District Magistrates (ADMs).

To this, the bench had said that the Supreme Court has passed two judgements in 2009 and 2018, which said that judicial officers should be appointed in claim tribunals instead of State appointed ADMs.

Earlier, the Uttar Pradesh government had told the apex court that property damage claims tribunals have been set up to adjudicate the claims of private individuals and government authorities for compensation for the destruction of property during anti-CAA protests and riots in the state. The tribunals were constituted under the Uttar Pradesh Recovery of Damage to Public and Private Property Law, 2020.

Last year, the apex court had asked the State government not to take action on earlier notices sent to the alleged protestors by the district administration for recovering losses caused by damage to public property during the anti-CAA agitations in the state.

The plea stated that the Uttar Pradesh government has appointed an additional district magistrate to deal with the process of notices for recovering damages for loss of public property during protests against the CAA whereas the guidelines laid down by the top court stipulated that retired judges should deal with the matter.

The petition further submitted that notices have been sent in Uttar Pradesh in an "arbitrary manner" against a person, who had died six years ago at the age of 94. The notices were issued to two others who are aged above 90, the plea claimed.

Seeking a stay on notices, the petition stated that notices have been sent to persons who have not been booked under any penal provisions and no details of FIR or any criminal offences have been made out against them. It was contended that recovery notices were based on an Allahabad High Court judgement passed in 2010 which is in "violation of the guidelines" passed by the Supreme Court in a 2009 judgment which was later re-affirmed in a 2018 verdict.

The plea, filed through advocate Nilofar Khan, stated, "The contradiction is that while the Supreme Court in 2009 put the onus of assessment of damages and recovery from the accused on High Courts of every state, whereas the Allahabad High Court had issued guidelines in 2010 judgement that let the state government to undertake these processes to recover damages, which has serious implications".

The petition also sought direction from the Uttar Pradesh government to follow the procedure as per the 2009 and 2018 guidelines of the top court while claiming damages to recover the losses caused to public property during such protests.

925 persons, who have been arrested so far in connection with the violent protests, may not get bail easily in Uttar Pradesh till they pay up for the losses as they have to be given conditional bail only after they deposit the amount, petitioner had added.