Amid speculation of resentment among BJP MLAs in the state, Karnataka Chief Minister BS Yediyurappa has denied any political rebellion and said that all issues will be discussed to clear the confusion amongst members. 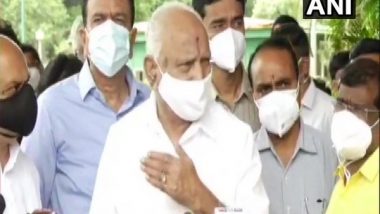 Bengaluru (Karnataka) [India], June 18 (ANI): Amid speculation of resentment among BJP MLAs in the state, Karnataka Chief Minister BS Yediyurappa has denied any political rebellion and said that all issues will be discussed to clear the confusion amongst members.

While addressing media personnel here on Friday, Yediyurappa said, "There is no confusion. Only one or two people spoke something to the media and that is being highlighted. They are doing it from the beginning. Incharge Arun Singh has not even met them, there is no confusion. No Cabinet member is worried."

Reacting to the allegations of BJP MLC AH Vishwanath, the Karnataka CM said that the high command of the party will decide about action against him.

Earlier in the day, Vishwanath stated that 80 per cent of the BJP legislators who met the party's national general secretary in charge of the State Arun Singh on Thursday felt that leadership in the state should be changed otherwise the party shall neither survive nor come back to power.

Speaking to ANI, Vishwanath said, "I have already spoken to the party in charge before on issues concerning the functioning of government, party, transparency and our responsibility towards people. There's corruption. His (CM) son, Vijayendra seems to be involved in all the state departments. The public is talking about intervention and corruption of his son."

Regarding state affairs, Yediyurappa told the media that there will be a core committee meeting later in the day where there will be discussions regarding political issues, floods and other issues.

"There will be a core committee meeting in the evening, I cannot discuss the agenda now. No agenda has been set, political issues, floods, and other issues will be discussed. We will discuss in the evening about giving relaxations and preparation for the third wave," he said.

BJP national general secretary in charge of the State Arun Singh is on a three-day visit to Karnataka amid murmurs of a stir in Karnataka's BJP unit.

Karnataka Deputy Chief Minister and BJP leader CN Ashwathnarayan refuted Vishwanath's allegations and said that the issue of leadership in the state has already been addressed by the BJP's National general secretary and party president.

He further said that the concerned national leadership and state leadership will look into the matter.

"There's nothing like that. The national general secretary, party president have addressed this issue (leadership change in-state). We don't have to talk about this time and again. The concerned national leadership and state leadership will look into it," said Ashwathnarayan.

Earlier, several BJP MLAs and ministers had demanded that Yediyurappa should step down as chief minister. State Tourism Minister CP Yogeeshwara in a statement had said that instead of the Chief Minister, his son has been ruling and controlling the Ministries of Karnataka. (ANI)