Get latest articles and stories on Lifestyle at LatestLY. A new study has suggested that disgust sensitivity can and does change - and, during the COVID-19 pandemic, concern about getting sick with a coronavirus infection was associated with an increase in disgust sensitivity. 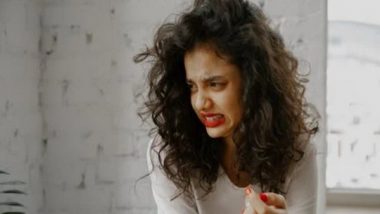 Washington [US], January 18 (ANI): A new study has suggested that disgust sensitivity can and does change - and, during the COVID-19 pandemic, concern about getting sick with a coronavirus infection was associated with an increase in disgust sensitivity.

The findings of the study were published in the journal 'Personality and Individual Differences'.

Also Read | Father Petitions to Government For Safe Tourism After Losing His 12-Year-Old Son At Paragliding Site in Himachal Pradesh.

Ohio State University researchers who had collected disgust sensitivity data for a larger project before the coronavirus outbreak compared those measures to similar data collected during and after pandemic lockdowns.

"What hasn't been tested thoroughly is the extent to which your environment actually shapes your disgust sensitivity. What happens when you're in an environment that has a lot of pathogens?" said Shelby Boggs, a doctoral student in psychology at The Ohio State University and the first author of the study.

"Disgust sensitivity was higher in studies we ran during the pandemic, but particularly higher for people who felt concerned they would actually contract COVID-19," added Boggs.

The Ohio State researchers focused on - and found evidence to support - what is known as the "calibration hypothesis," which suggests that disgust sensitivity is a more fluid measure that changes with time and circumstance.

This study involved nine surveys conducted between late 2018 and June 2020. Before the pandemic, the team collected data from about 2,300 participants in seven waves that included an assessment of their disgust sensitivity. The pandemic's arrival in spring 2020 opened up an opportunity for a natural experiment to test the question of environmental effects on disgust sensitivity.

The researchers conducted two more surveys in late spring 2020, of 500 people each, questioning participants about a variety of their pandemic-related opinions and behaviours - including how concerned they were that they might contract COVID-19 - and assessing their disgust sensitivity. The first was an entirely new group of participants, but the second was a subset of people who had participated in the pre-pandemic surveys - providing a rare longitudinal look at disgust sensitivity.

"Instead of comparing two groups of people pre- and post-pandemic, you're comparing the same people and finding that to the extent that you perceive yourself at risk of contracting COVID, we get this heightened disgust sensitivity," Fazio said.

"The increase in disgust sensitivity really being limited to those people who were concerned about contracting COVID-19 also eliminated a number of alternative explanations for the data," Fazio added.

Part of the disgust sensitivity scale asks participants to rate various experiences - such as smelling urine while walking in a tunnel under a railroad track or seeing someone put ketchup on vanilla ice cream and eat it - on a scale of 0 to 4, where 4 is extremely disgusting.

"One item on the rating asks how disgusted you would be if you were on an elevator and someone next to you sneezed. Another asks whether you'd be disgusted by eating chocolate shaped like dog doo - which has nothing to do with interacting and contracting a disease," Boggs said.

Fazio noted that the enhanced sensitivity was also evident when participants were asked to rate various visual images related to disgust, such as rotten meat with maggots in it. Those who were concerned about contracting the virus found the images more unappealing - meaning the effect extended beyond the items measured by the assessment scale.

Boggs predicted that once the most serious threats of the pandemic ease, disgust sensitivity in people concerned about getting sick would habituate to pre-pandemic levels.

"Experiencing disgust all the time is not a fun state to be in. It's a very vigilant emotion," she said.

"My suspicion is if we recontacted people a year or two out of pandemic mode, they probably would have gone back down in disgust sensitivity levels. If the threat subsides, then presumably your disgust sensitivity should subside as well," she concluded.

This work was supported by the National Science Foundation. (ANI)